Central Asia is a less popular region of Asia, which until now was a black hole on the world tourist map. It is a region that requires from travellers strength, independence and endurance. On the other hand Central Asia gives great satisfaction, and if someone likes open spaces, great valleys, deserts and ancient cities on the Silk Road, then Central Asia is the region that I recommend the most. Knowledge of Russian is essential.

The division of Central Asia

Central Asia is defined in two ways. It can be defined in purely geographic or a cultural way or in both ways at the same time, as I do it. I consider Central Asia to be the land east of the Caspian Sea inhabited primarily by Muslim peoples of Turkish origin, and associated with nomadic lifestyle of the ancient Silk Road. Central Asia also includes the autonomous region of China Xinjiang Uygur (East Turkestan) because it culturally and geographically fits this definition, and Afghanistan due to geographical location. Simply put Central Asia is made of 5 former Soviet republics plus Afghanistan and Eastern Turkestan, although to Central Asia I also include the entire territory of the Caspian Sea. 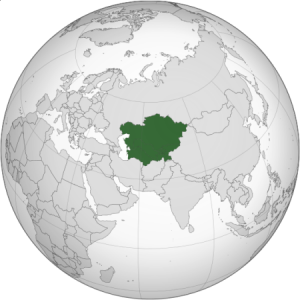 Central Asia occupies an area of about 6.5 million km2 and is very sparsely populated. It is inhabited by only 129 million people.

There are different divisions of regions but my own I treat as the only right one, and that’s why to Central Asia I include the following countries and territories:

A deeper analysis of Central Asia

For clarification; 10% of Kazakhstan is in Europe because the country is crossed by Ural River, which is the continental border between Europe and Asia. Either way, still 90% of Kazakhstan is in Asia, and in spite of having 25% of its population of eastern Slavic origin, it is still more Asian. Also, despite of freedom of religion Islam is practised by 70% of Kazakh population. I therefore think that these are sufficient arguments that qualify Kazakhstan to Asia and not to Europe.

(On a side note, Turkey which occupies 3% of Europe is forcibly drawn to Europe by anti-European politicians, while Kazakhstan with 10% of its territory in Europe is always in Asia, and not because of invasions and occupations but due to natural conditions). In addition, although it happens rarely, some geographers influenced only by political issues also include the three countries of the Caucasus to Central Asia, because the same as the 5 “stans”, they were also a part of the Soviet Union. However Caucasus does not belong to Central Asia or Eastern Europe, but always to West Asia. 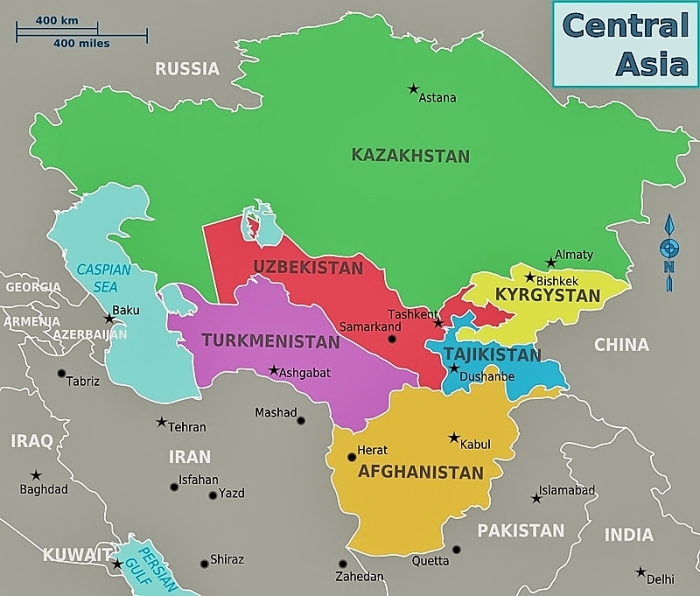 Map of Central Asia, with Afghanistan.

Upon closer analysis, which has nothing to do with politics, I don’t include the Chinese controlled autonomous region of Xinjiang Uygur to East Asia but to Central Asia. Xinjiang Uygur (another name: East Turkestan) is occupied by China, but it is still inhabited mostly by Muslims of Turkish origin, who come from Central Asia and cultivate the traditions and culture of Central Asia. Xinjiang has a border with Kazakhstan, Kyrgyzstan and Tajikistan, and the same as in the countries of Central Asia, there are yurts, cuisine, national games, local customs and even the climate that has nothing to do with China and the Chinese race Han, but only with Central Asia. On the basis of the gathered evidence I define East Turkestan as Central Asia within the borders of China, although I also want to point out that demography of the conquered territories of China may quickly change in favour of China. I also recommend my article titled: “The real map of China”.

According to UNESCO ‘Central Asia is an area of Middle Asia located more than 1000km from the open sea’, but such division is in my opinion not convincing enough, because it is not compatible with the cultural aspect. In addition, Kazakhstan and Turkmenistan border the Caspian Sea, and that’s why it makes me not agree even more with the theory of ‘1000km from the sea’. According to that pseudo-scientific opinion someone could also include to Central Asia countries such as: Mongolia, Tibet and much of the western provinces of China, but I strongly disagree with such division. We cannot just draw a circle on a map of Asia and all countries  which are 1000km from the sea classify into one region. In such a case they would also have to classify parts of Iran, Russia, Pakistan and India. To me such division would be plain absurd. I think that UNESCO should offer me a job to save its honour.

I also want to recommend my press publication titled: “From the steppe to the glass skyscrapers”. 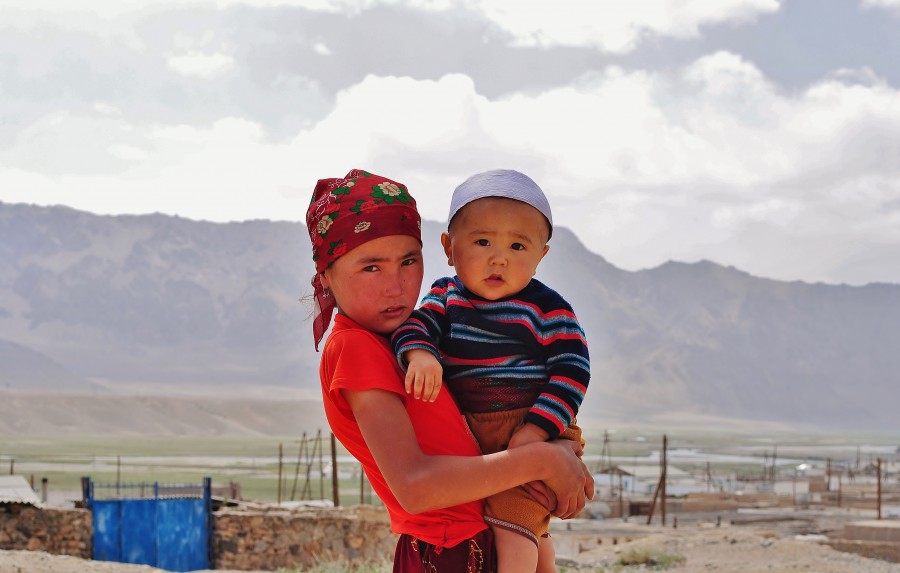 Children on the Pamir Highway, in the autonomous region of Tajikistan – Nagorno Badakshan.

In terms of tourist attractions of Central Asia I believe that it is a very interesting region but also very underappreciated. When I was traveling around Central Asia in 2010, 4 countries in this region were just opening up to tourism, 1 was closed and 1 was at war. Travelling around Central Asia can turn out to be a ‘heavy landing’, especially when comparing to Southeast Asia. In Central Asia tourists don’t only have to fight the hard living conditions, difficult terrain or food which is not the easiest to digest. Tourists have to fight with the legendary bureaucracy, which flourished for decades in the company of KGB. Anyway, things are moving forward and I am optimistic.

When it comes to the natural beauty of Central Asia there are mainly two deserts: Kara-Kum and Kyzyl Kum, but also its majestic mountains, scenic valleys, glaciers, the remote and cold Pamir Highway (M 41), the endangered Aral Sea, the endless steppes, nomadic shepherds life, great flora and fauna, turquoise alpine lakes high in the mountains, and blissful peace and quiet. A lot of tourists choose Central Asia for cultural reasons, and the real gems over there are the ancient towns located on the Silk Road. Shortly speaking it was the old trade route linking China, Central Asia and the Middle East with Europe, from the III century B.C. Even though Genghis Khan during the golden years of the Mongol Empire turned into dust most of the cities on the Silk Road, to these days a few great cities have survived. Some of them are: Samarkand, Bukhara and Khiva, but there also a few other ones. These are the cities which still represent more than 2000-year-old architecture, art and a way of making household items; and that’s why all those things and many more are worth seeing in Central Asia. 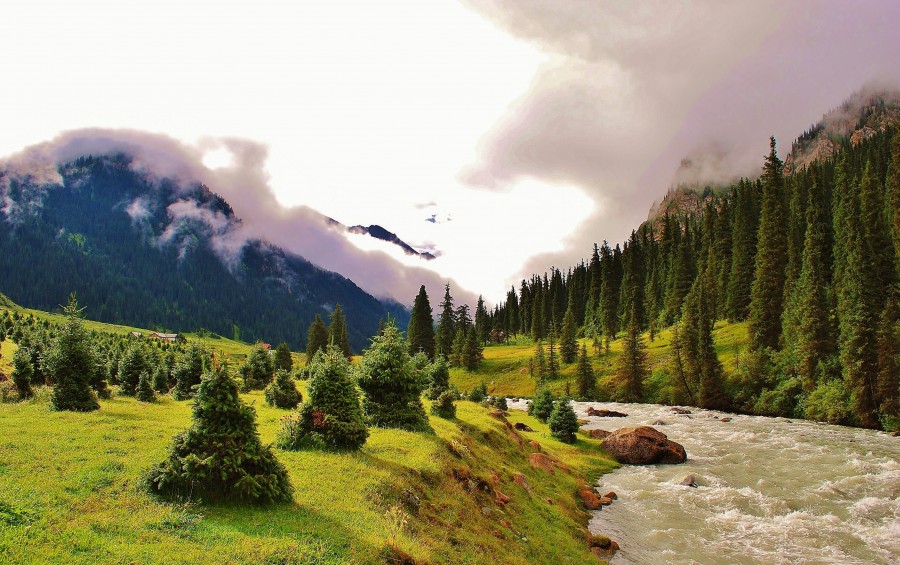 Kyrgyzstan – the picturesque area of Ala Archa.

The hardship of a fulfilled expedition through Central Asia, seeing the natural beauty alongside Afghanistan, walking the steppes, mountains, fighting one’s own weaknesses and crossing the high altitude desert of the Pamir Highway (728km of beautiful nowhere) – are the greatest personal rewards of travelling through this region. I also recommend “Description of the World” by Marco Polo, who on his way to China went on a hard expedition through Central Asia.

“The plain is called Pamier and you ride it across for twelve days together, finding nothing but a desert without habitations or any green thing, so that travellers are obliged to carry with them whatever they have need of. The region is so lofty and cold that you cannot even see any birds flying. And I must notice also that because of this great cold, fire does not burn so bright, nor give so much heat as usual”.

Marco Polo, “Description of the world”

(I recommend articles about specific countries, where there is more information. The main purpose of this article is location of the region and its division).