Singapore is a great place to visit. In addition to the warm climate and attractive beaches, one can see the colonial architecture left behind by the British, and interesting temples of many faiths. Singapore has been shaped by many cultures and therefore in such a small area tourists can visit small part of China, little India, and ambitious achievements of the modern architecture. I highly recommend Marina Bay and Gardens by the Bay, with good restaurants and spectacular lighting at night.

In Singapore, one can taste dishes from many parts of the world, or do nothing special and just enjoy the surroundings. For example, I liked the Aljunied station, a district which is not on postcards, but which has its own specific character. I was also at the casino and I managed to win a few hundred dollars, although I don’t recommend it to others. 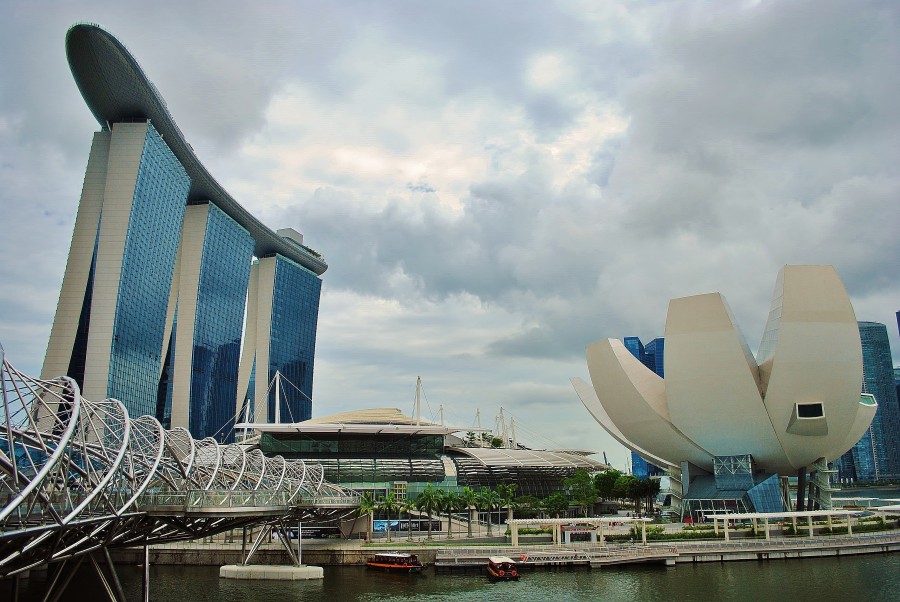 Singapore has many attractions, and the great organization and cleanliness of the city allow easier exploration. I recommend the Muslim district of Kampong Glam and the closely located “Batman building”, the Quays, the colonial district. I definitely recommend the Singapore zoo and the Botanical Gardens. On my last day I always go to the Sentosa island, where there are nice beaches. In the relatively small area that Singapore occupies, we can find many interesting attractions that can keep us busy for at least a week.

Singapore is a country/city, which has a capital city called Singapore and a river of the same name. Singapore occupies an area of ??only 572 km2 including several small islands. This means that it is only 23 km from north to south and 42 km from east to west, not including several adjacent islands. As a curiosity I want to add that Singapore is located only 137 km away from the equator, and that’s why its climate is characterized by heavy rainfalls and moisture.

Without a doubt Singapore is the Asian economic miracle. Singapore is one of the most prosperous countries in the world, and has a very well developed economy based on free market. Singapore has strong international trade links all over the world, stable economy and strong currency – the Singapore dollar. Also revenue per citizen is one of the highest in the world and it is higher than GDP of many highly developed European countries and North America. Singaporean economy depends heavily on exports of such products as: electronics, chemicals, pharmaceuticals and various technologies. Singapore has also a very well-developed financial sector and the busiest port in the world, which has already surpassed Hong Kong and Rotterdam. Gardens by the Bay; Singapore.

Foreign investors find Singapore to be very attractive, and the country is a leader in pharmaceutical and medical technology. Singapore is also on the list of the least corrupt countries in the world and enjoys low taxes (14.2%). Thanks to very good education and infrastructure Singapore has well-qualified work force and achieves one success after another. Unemployment is only 2%, and average economic growth is almost 18% per year, which is the fastest in the world. One of the most important industries of Singapore are: financial sector, banking, biotechnology, electronics, energy, oil refining, textiles, food. Singapore also invests abroad, mainly in China, but also in Malaysia, Indonesia and Hong Kong. Although Singapore’s army is small, it is the most technically advanced of all South-East Asian  countries. Tourism industry also plays large part of Singapore’s economy.

Education in Singapore is one of the best in the world. Primary education is compulsory and the official language in schooling is English. Learning English begins in kindergarten, in addition to all the national languages. Literacy is at the level of 96.1%. Singapore has also a highly qualified workforce.

The health system is one of the best in the world, and the average life expectancy is higher than in the U.S., despite much lower expenditure on health. Singaporean Government also places great emphasis on fight against malaria and HIV/AIDS. There are a number of mandatory health insurance in Singapore, and the system is so unique that it would be difficult to copy in other countries. About 80% of Singaporeans use the National Health Service, and the rest is treated privately. Singapore also has the lowest level of infant mortality, just below Iceland. Culture of Singapore is based on immigration, mainly Chinese, Malay and Tamil. Each of these groups has its own language ??and a separate culture, although the official language is English. In addition, Singapore is a country open to immigration because of very low number of children per woman. In 2009 40% of Singaporeans were foreigners – the highest such ratio in the world. Singapore’s cultures and races are shaped by immigration, although the main ethnic groups are: Chinese (74.2%), Malays (9.2%), Indians (9.2%) and others (3.2%). Although English is the official language, it is used with different literacy. For example, 80% of the population can speak English, Mandarin Chinese is spoken by 65%, Malay by 17%, and Tamil by 4%.

As one might guess even though Singapore is small it is very diverse and that’s why when we travel around Singapore we are in several countries at the same time. Each of the nations has its own cuisine, its own arts and culture and that’s why I do not think it is possible to talk about the culture of Singapore in a singular form.

Freedom of press in Singapore I would best describe as “a lot to be desired”. According to press freedom index, Singapore is on 136th place in the world – even below countries such as Iraq and Zimbabwe. Economically Singapore is a developed country, but in terms of press freedom it is a Third World country. Death penalty for example seems to be a taboo subject in the Singaporean media. 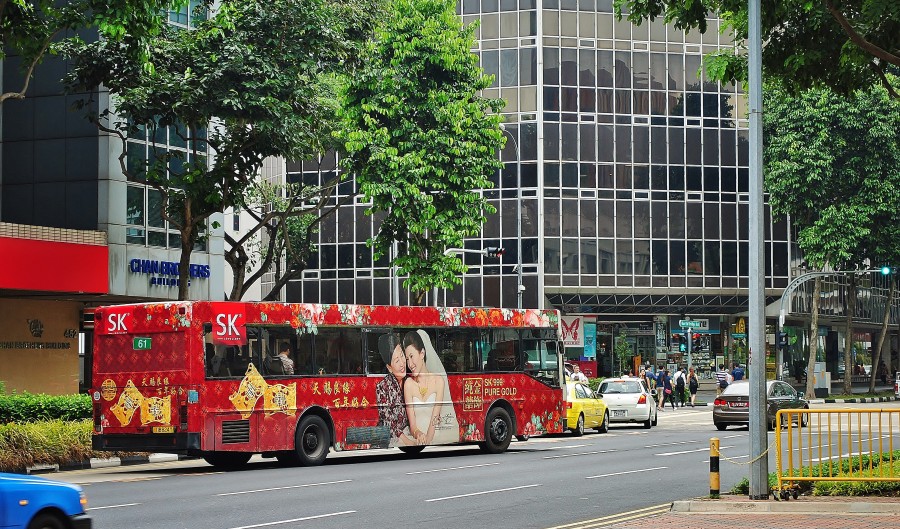 On the other hand, let’s look at a country that once looked like England. There, freedom of speech is only when it suits the Left, while those who have an unflattering opinion about immigration, go to prison on the basis of fabricated evidence. The more I travel the world, the more I laugh at “democracy.”

Singapore`s environment issues is a horror novel called ” The Evil Dead”. For such a small country Singapore has a lot on its conscience, what proves that it is a developed country only in certain areas. Among many problems to the worst nightmares I include: air pollution, not enough access points to fresh water, problem with garbage disposal, smoke coming from the fires in Indonesia, acid rain which destroys entire ecosystems, killing fish by drifting nets. All environmental problems of Singapore are because of rapid economic development and a very small space.

However on the bright side Singapore plants trees in areas which were destroyed by fire or are not suitable for use. In my opinion it is still too little and too late!!!

Singapore emerged on the world map in 1819 when the British officer, Sir Raffles, chose this small island to join the British Malay territories, buying it from the Sultan. It was the way to compete for influence in Malaya with the Dutch. Soon, thanks to the skillful policy, Singapore became an important commercial port and began to pull buyers from all over the world, what grew the economic power of this small island. The city has become virtually free of tax. Indians, Chinese, rich Arabs and Jews were getting to the port, and this way Singapore started gaining importance. A definite turning point was the opening of the Suez Canal in 1869 as the sea route from Western Europe to the Orient became much shorter and the “world became a smaller place.”

With increased business, population also grew. Because many nationalities, races and cultures lived in such a small territory, they built objects culturally specific to each of them and many types of cuisine also began to flourish. Unfortunately different races also started mixing what the author of Kompas Travel can not support. Tragically, in 1942, Singapore’s road to progress was interrupted by Japanese occupation. The British foresaw a threat,  but a lack of organization and a lack of strong leadership meant that the Empire of Japan acquired Singapore for three and a half years. It was the hardest period for the whole of Malaya and South-East Asia. Many were killed on the spot and others were deported to Thailand and Burma on forced to labour as slaves, were many were dying of starvation and disease. 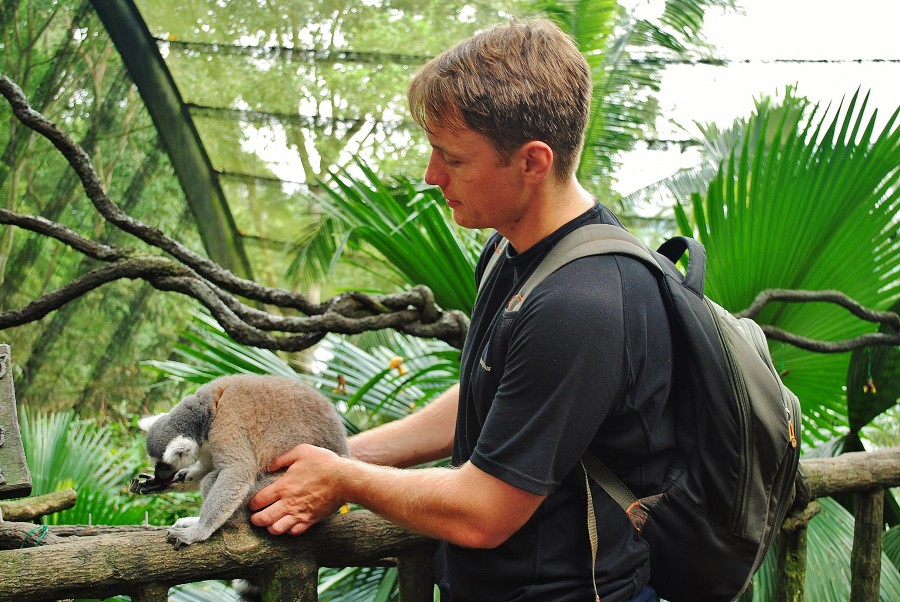 With a lemur in the Singapore zoo.

After the war, in 1946, Singapore was a British colony what in many ways had its advantages, but people were hungry for independence. Then Singapore was ruled by the Communists, but fortunately because of constitutional negotiating and agreement with London, Singapore became independent in 1959. For a short time the Communists were very strong, but a breakthrough came in 1963 when the new, independent Malaysia was created, comprising Malaya, Singapore, and Sarawak and Sabah in Borneo. Two years later, in 1965, Singapore separated from Malaysia and became an independent, sovereign country.

Tourist Visa: For each border crossing we receive a free stamp entitling us to a three-month stay.

Prices: (for 2018 when £1 = $1.8) Singapore is the most expensive country of South-East Asia, but taking into account an overall comfort, it is still not so expensive. Night in dormitory should cost about $15-$20, lunch $3-$5, an underground ride $2. Prices to all museums and many other attractive places should be taken into account, but they are affordable. Overall, I consider Singapore a very good value for what there is available.