There are many ways to use coconuts. Coconuts, next to bamboo, are plants that in many Asian countries practically save lives. Coconuts are used for eating and drinking in many forms, they are used in construction, and are important for skin care. From coconuts Asian people also make many household items, but also souvenirs for tourists. Coconuts teach us respect for nature, because everything we need is in nature.

I wrote a separate article about 100 way of using coconuts, because in many countries they are used absolutely for everything, and that’s why they have become the blessed gifts of nature which save lives. There are few types of coconuts, and they are not only used for drinking or eating, even though they are mostly known as refreshing and healthy drinks. Coconuts are also used for making coconut oil, coconut chips and even alcohol. Coconuts are also main ingredients of many spices and dishes, and their remains are used for feeding animals. 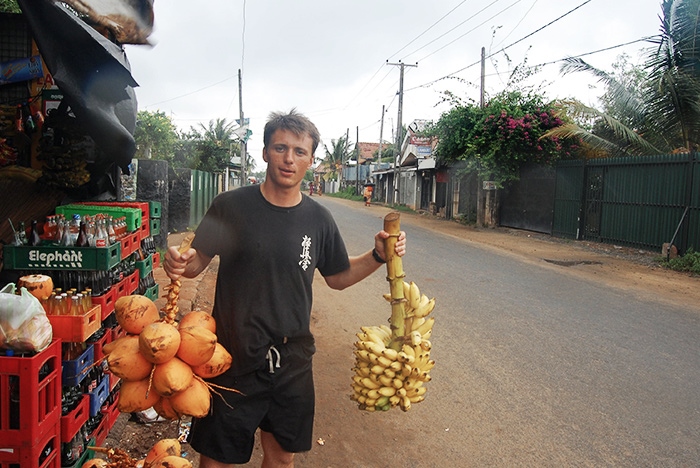 My stay in Sri Lanka was rich in coconuts.

Coconut shells are used in temples where breaking them brings luck. There is also a tradition in Sri Lanka that babies’ first food consists of coconut, and a dish served at weddings, also in Sri Lanka is called kiri bath, which is rice cooked in coconut milk. In Sri Lanka most sweets contain rice and coconuts, because these two components are widely found all over Asia. Apart from that a lot of dishes are fried in coconut oil, and a good example of that is a kind of pancake which only ingredients are coconut milk and rice powder. Coconut oil in combination with honey or avocado add a better and richer taste to dishes.

Coconut oil combined with fresh spices makes an excellent sauce for salads and soups, and coconut milk added to coffee or tea is healthier than sugary and canned milk powder. Coconut oil in conjunction with egg yolk, salt, pepper, mustard and a little vinegar gives a natural, although a very different mayonnaise. Coconuts can be used in a kitchen in many ways, and thanks to white explorers travelling to developing countries coconut oil is becoming increasingly popular also in the European countries. Coconut oil, coconut milk and coconut chips are also used for baking cakes and seasoning grilled fish. It seems that the possibilities of using coconuts are endless.

Coconut oil is of great value to women, because it helps them to care of themselves. Women add it to their baths, they create facial and body lotions out of it, and they use it to massage themselves. Coconut oil also helps them to get rid of sunburn pains and softens up their feet. Coconut oil helps in the fight against dandruff, and helps to heal minor wounds and scratches. Besides, it is often used as a soothing lotion against rashes, against itching, dehydration and bowel pains.

Breastfeeding mothers should also add at least 3 teaspoons of coconut oil a day to their daily food supply, to ensure a better milk production for their babies. However it is also good for women to soothe their nipples with coconut oil, as it gives them a relief whilst breastfeeding, and it is tasty for infants. By the way, whilst drinking coconut oil it is good for a woman to rinse her mouth first to keep her teeth and gums in a better health. Let’s also remember that whatever is good for a woman, it is just as good for the beloved breastfeeding bitch and a female kitty too. By the way, coconut fiber soaked in coconut milk can be also successfully used to clean teeth of the whole three of them. Coconut’s fiber is used for brushes, ropes and it is a natural way of body scrub. When I was in Laos I bought a woman a nice belt made partly of coconut, in Malaysia I bought a bag made of coconut, and in Vietnam I bought a coconut wallet. Elements of coconut are also successfully used as ornaments for flip flops and lamp shades for evening lamps, which help women to create a romantic mood. Coconuts are also used for making spoons, forks, soup bowls and souvenirs for tourists, such as sculptures, plates, animal figures, earrings, buttons, toys or tea sets.

A coconut bra looks good on a woman, and when a woman gets bored with it, it decomposes without polluting the environment. (One of the many beautiful landscapes of the Philippines.)

Out of coconut shells and a piece of rope women can also make bras for themselves to wear them whilst on a beach, and out of coconut leaves and coconut fiber they can make natural beach outfits and hats. As if that was not enough those women who have been left with a little bit of coconut oil, can squeeze some lemon into it to create a natural remedy for cleaning furniture or lubricating guitar strings. Of course a good woman should also massage her husband with a coconut oil, what she should always see as her great advantage due to strengthening the family values.

There are many ways in which a coconut oil could be used, but I think that the best option would be to discuss it with a doctor who specializes in natural medicine, and not the one who can just prescribe an antibiotic. Those gentlemen who keep women in their homes should also talk to gynecologists, as coconut oil might soothe their vagina pains and its surrounding areas too.

On the other hand however, coconut oil mixed with flower teas improves the condition of women’s throats, when they talk too much…….God bless them. I’ve noticed that whenever I buy a woman coconut oil or coconut butter, she is happy and she seems to be more attached to me. Perhaps this is the right gift for a first date, and a second date too.

Coconut palm trees as part of a woman’s beach life

Let’s assume that we would not use coconuts for eating, drinking, care or housing. Coconut palm trees alone which grow wild near beaches and provide shelter from the sun are already beautiful. Walking with a beautiful woman on the beach is much more attractive when we have palm trees nearby. When I was in Sri Lanka I walked on a coconut palm tree which grew above the water, and when I was in Thailand my lovely blonde rocked on a swing also attached to a palm tree.

In one of the many exotic countries which I’ve visited, palm trees are also the places of fastening hammocks, which become good observation points of the sea, and their huge crowns provide the blessing shade. In the evening, during sunset palm trees add the loving couples the special mood. When I was in India I was in a restaurant on a cliff under coconut palm trees. 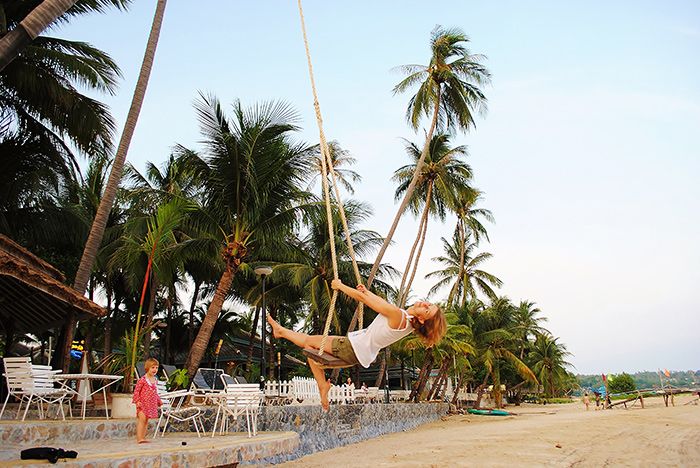 Swing on a coconut palm.

I will never forget this beautiful view in the coastal town of Varkala, and from time to time also the falling coconuts. When I was in Goa I slept on the roof and I had crowns of coconut palm trees over my head, and when I slept in a house on the island of Koh Phangan in Thailand, I was awaken by the sea and by coconuts falling on the beach. Women obviously love that, the same as probably the whole of this very romantic paragraph.

Coconuts are also used in construction and nothing gets wasted. Out of strong coconut trees people make boards, fences and house frames, and leaves are used for making woven walls. Coconut palm trees are used for making railings, small bridges, window frames, small boats and rafts, furniture, doors, floor panels, electric posts, and probably many other things, such as firewood when already dried out and wooden charcoal is used for production of chemicals.

Another factor when it comes to coconut palm trees is also ecology, because in Asia and the Pacific reasonable cutting can take some pressure off wild deforestation. All the above things made from palm trees also have their distinctive, exotic look which are appreciated by tourists. Palm trees can be also easily cut into different shapes and varnished too.

Even though palm trees grow from fallen coconuts, on average it takes up to 20 years until they reach a height of about 20m; but for lush foliage and edible coconuts we do not have to wait that long. After about 6 to 10 years palm trees begin to grow fruit, although 20 year old palm trees give the most. Coconut palms of course need a tropical climate and right soil, although planting palm trees for example in Poland, in a pot is possible. However, because of temperate climate and lack of sunshine in homes such palm trees would survive perhaps six years and would never grow fruit.

In the natural environment palm trees may produce from 50 up to 200 coconuts a year for 80 to 100 years. I give all this information to my readers, so they could realize that coconut palm trees can feed, provide medications and shelter to many generations for many decades.

I assure that every ambitious traveller could find more ways in which he could use coconuts, and would be impressed how many beautiful things can be made by handicraft specialists in Asia. In India, Sri Lanka, Thailand and the Philippines there are workshops where coconuts are turned into works of art. I recommend everyone to pay attention to it during their numerous journeys. 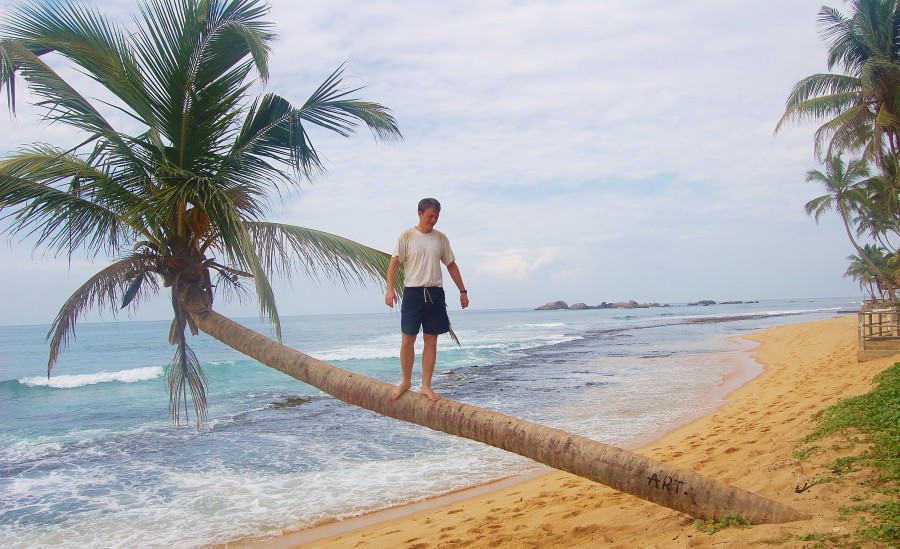 You can also walk on coconut trees. Sri Lanka.