Irrawaddy dolphins are a river species of dolphins which are still in danger despite being protected. They are related to killer whales. Irrawaddy dolphins (Orcaella brevirostris) are a rare species closely related to killer whales. They live mainly in the Bay of Bengal and in South – East Asia, and the largest population of as many as 90% live in India and Bangladesh. In other parts of the world, such as Laos, Cambodia, the Philippines, Malaysia, Indonesia and Burma they are a critically endangered species.

Irrawaddy Dolphins are protected by law, so their population could regularly increase. Still however, it requires a very long time. It might be interesting to know, that Irrawaddy dolphins are an oceanic species which has adapted to life in rivers and close to open waters, They can be found in the Mekong river, Ganges and Irrawaddy, which is how they got their name. According to scientists, in 2020, only 10-13 Irrawaddy dolphins remained in the Philippines, in India about 156, while in Bangladesh there about 6,000 Irrawaddy dolphins! Let’s remember however, that the Irrawaddy dolphins are not the only species of river dolphins. There are also pink and bottlenose dolphins in the inner and outer waters of Bangladesh.

When I was in Si Phan Don (4,000 islands region) in Laos I sailed to Cambodia. This is possible from the island of Don Khon. For only 30.000 Lao Kip based on four people in a boat, I had a short, about a 15 minute cruise. After sailing through the river rapids and trees sticking out of the water we got to the Cambodian shore. It was a small border village of Aung Cheu Teal, although I doubt very much if it was an official border between Laos and Cambodia. When I was getting closer I saw a wooden hut and posts with flags of many countries, what looked like a border. It was quite an interesting place but the main attraction there was the Irrawaddy dolphin watching. I watched them from a platform floating on the water.

Indeed, it was a very good place to watch them and I even saw the whole family. They sometimes emerged very close but more often far away. I took many pictures, but unfortunately dolphins are very fast and very hard to be taken photo of. It was certainly a very nice experience, but I don’t advise to expect miracles. Dolphins don’t jump into the air and they don’t jump through a burning hoop. They emerge only for a moment to take a breath and disappear quickly under water. Tourists must have a quick optical response with them. 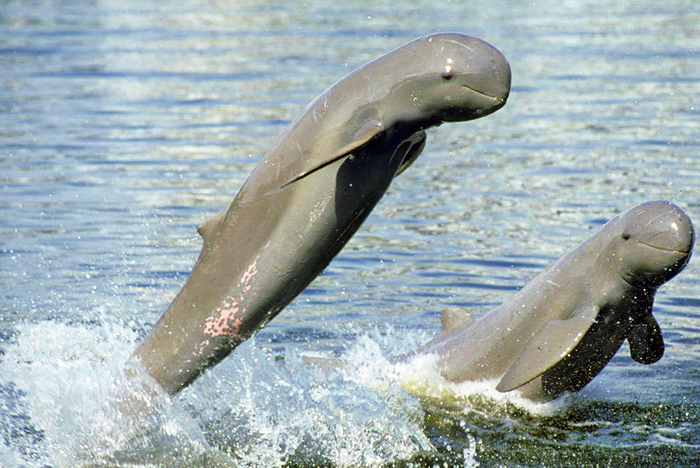 That pleasure costs $2 or 20,000 Laotian kip, or 8000 Cambodian riyals, and it’s worth paying in dollars. After all I boarded a small wooden boat and went back to Laos.

A year later, I organized a nearly one month trip around Cambodia and went to a small town on the Mekong river called Kratie. From there I took a 15km bike ride on a horrible, Swiss cheese like road, but also an adventurous and a beautiful path to the village of Kampi. There, with a Dutch couple I took a boat for $6 per person and spent over an hour watching the Irrawaddy dolphins. As before, in other parts of Cambodia I saw them from a distance. Not for long however, but it was worth it because the trip was fun, and I saw a whole family of dolphins.

I wrote this article to show a great importance of protecting wildlife and their natural habitats. Irrawaddy dolphins are just a one of many endangered species which I encountered during my travels! I ask for your interest in river dolphins and their protection. (This article will grow if I see these dolphins in other countries.)