Snake charming is obviously a scam, because snakes are deaf and unable to hear anything. They only react to the movement of the pipe, and when a ‘snake charmer’ steps on the ground, they can feel the vibration of the ground. What I like the most is the contact with snakes, which is why I always try to include them in my travels. I prefer snakes in nature, rather than at shows for tourists.

During my travels I always look for my favourite animals – snakes. I keep a few snakes at home, but only constrictors and I know what I can expect from them. I’m writing this article to explain certain fantasies about snake charmers and about reptiles, which lead secretive lives far away from humans, and they are never guilty of anything. For that reason I’ve described a few of my encounters with cobras. Whilst in India, Nepal, Sri Lanka or Malaysia I had many opportunities to get very close to them, even though it was definitely an adventure with a thrill.

When I was India I saw  ‘charmer’ who had cobras in his basket and played a flute. Cobras were in a threatening position, and it they looked at me the people around were horrified. The owner of the cobras handled one so I did too, but very securely at first as these snakes do not constrict their prey. These are deadly venomous. Despite that fact I gently grabbed the cobra by its tail and kept its head in a distance. 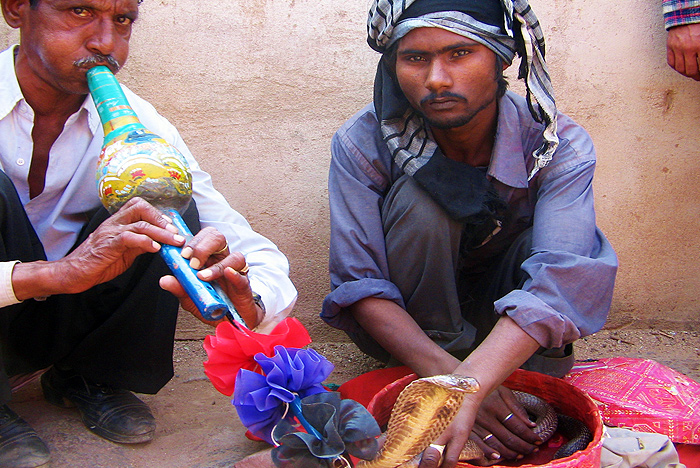 On the other hand, although I was very careful there is never anything certain with cobras. I was told that the cobra had its teeth taken out, but teeth grow back and the venom is produced all the time. The cobra I handled was calm and didn’t attack me. Maybe its mouth were sewn, maybe their teeth were removed and it was given a drug, but either way it looked very active to me. On the other hand I have to remember that this type of game could finish with my death, because I would never know if the cobra was prepared for the show, and if I’d be always lucky.

There is also a theory which says that cobras dance when they hear music. This is obviously not true, because snakes are deaf and cannot hear anything. They only respond to movement of a flute and they can sense vibrations of the ground, when charmers hit it with their feet.

Although it was an interesting experience and at the same time so typical for India, we should be aware that the use of any animals for shows like that or hurting them should not be encouraged. Human contact with a snake or any another animal is acceptable as long as it is comfortable for both humans and animals.

Holding a cobra in Sri Lanka.

Another time, when I was in Sri Lanka, next to mango retailers there was also a boy with two cobras, and of course I could not resist them. Because I had three beautiful snakes at home and I missed them terribly, I was really tempted to play with those cobras.

As it turned out later, my encounter with that particular cobra was a higher degree of my snake experience. Those cobras were not devoid of venom, they seemed aggressive and were hissing very loudly. Regardless of that, there was still a way to pick them up because cobras only look ahead and never up. I grabbed one of them by the tail, even though the cobra was hissing loudly at all times, whilst standing in a combat position. I noticed that everything needs time, because when I held my cobra that way for a while it began to calm down. There was also a second cobra in the basket and this one stood quite high with its hood widely open. When I saw it, I grabbed the basket from the back and lifted it to the height of my waist.

Then I grabbed the cobra by its neck and held her that way for a few minutes. That cobra was also in a combat position at all times but seemed quieter than the other one. I also noticed that the hissing cobras paralyzed people who were passing by, but to me it was just ‘like another day in the office’.

Cobras in India awaken to dance.

This was yet just another great experience of my trip, which I would rather not recommend to everyone. The reason is simple – you can die!

Some time later, whilst travelling in other parts of the Indian Subcontinent I became so rude, that I was chasing cobras in their natural environment. I caught them by their tails and tried to ‘charm them’. This is however a very unforgiving hobby, only for the chosen ones.

Searching for pit vipers in Malaysia

During my quest around East Malaysia (Malaysian Borneo) I spent a few days at Bako National Park, which in addition to its natural wealth and opportunity to observe the long-nosed monkeys, is also a home to green arboreal pit-vipers …..an that’s why I warmly recommend it. At that time I had the less experience with vipers, so I thought it was worth a try. I went on a trip with a group in order to see the jungle at night, but my personal aim was to find a pit-viper.

When we finally succeeded, the group was scared because the snake was highly venomous, but regardless of it I handled it on a stick and held its tail in my hand, and then I quietly explained people that there was no need to be afraid. Then I saw those snakes several times, and I want to advice that it is worth taking a close look at trees, leaves and gaps in branches, because those are the places where green vipers usually hide. 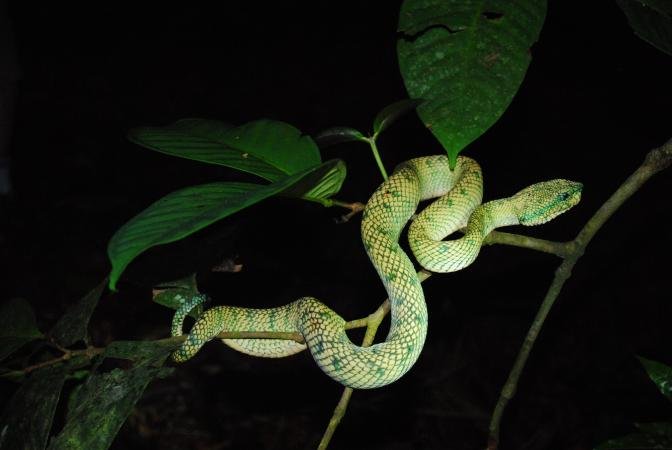 To those who dare to have close interaction with snakes I wish wonderful and blood freezing experiences. As some of my readers have guessed I am the true snake charmer, both during my travels and at home.

Ophidiophobia is an irrational fear of snakes, and unfortunately this kind of phobia affects about 30% of humanity. The word comes from Greek ofis (snakes) and fobia (fear). The term is similar to herpetophobia, what means a fear of all reptiles and/or amphibians. It is interesting that most people have never been in contact with snakes, but they are still afraid of them or they hate them. According to many psychologists irrational fear of snakes or spiders for example is defined as primary fear, which is a universal fear of mankind and primates. For example in medical language ophidiophobia is defined as abnormal fear of snakes, what means that according to the above 30% of humanity has a mental disorder.

Fear of snakes helped to survive first people, what as a result has become a trait of humanity even centuries later, when people would have to try hard to see snakes. Snakes were also used as a symbol of evil in the Bible. Additionally the fear of snakes is fueled by the media for commercial purposes and people involved in tourism. Snakes are very well suited to meet people’s need for hatred.

Snakes don’t walk on two legs, and they do not feed their young with milk. They don’t have fur and they are not similar to us in anything. This means that despite that Aesculapian snake is a symbol of health care, despite the fact that snakes help people in controlling pests, and despite that snakes provide people with venom for medicines and serums, still most people are not able to show them any gratitude. People look with disgust at photos of snakes, and they react with even more disgust to pictures of snakes swallowing rabbits, which by the way devastated Australia. However on the other hand they look friendly at bears or tigers, which would rip their children to shreds. 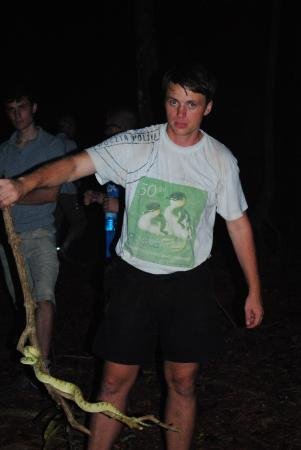 With a viper in Borneo.

Snakes lead secretive lives away from people, and if they are close to us, that prey on rats which destroy our grain stocks and electric cables. Snakes are our allies, and when it comes to envenomations, thousands and millions more people drown in their bathtubs or get killed by drugs than by snakes. What’s more, rattlesnakes even have a loud warning system which notifies people in time to not to get close to them. In my opinion, when it comes to certain issues people are not fully rational beings. Especially for the most empty, selfish and retarded women reptiles are seen only as part of their gallantry. It is because of such a terrible attitude to those beautiful animals and irrational fear that 30% of humanity shares with apes, snakes have become victims of people’s hatred and their desire to possess.

I always urge everyone to respect and protect snakes and their environment. My adventure with snakes never ends and I hope it would last forever.

I also recommend my article on Irrawaddy river dolphins.