Ancient Persia is one of the oldest civilization of the world, and it has a lot of historical and cultural heritage, rich art and good people. Regarding terrorism and the “axis of evil” it simply makes me laugh when I hear about it, Globalists have military bases in the Middle East, the terrorists state of Israel, and thousands of nuclear bombs – and Iran has none. This proves the best who is the threat to whom.

After a fascinating trip around Caucasus I finally got to the Islamic Republic of Iran, a very interesting, adventurous country of rich history and art. I spent in Iran 1 month and 10 days what gave me enough time to go around the whole country, see the natural beauty, visit a lot of non touristy places and get to know better Iranian realities. My experiences in Iran were ones of the most interesting and I think that to a traveller it would be always a wonderful trip.

Apart from history, art, good cuisine and Persian culture Iran is also a country of many contradictions, on one hand opening our eyes – on one hand to the true meaning of the Islamic regime and on the other to the greatly exaggerated hate propaganda made by Israel and the West.

The people of Iran

I also have good opinion about the Iranian people themselves. I think they are very hospitable, helpful and they always seem to be glad to see a tourist from abroad. They asked me a lot of questions about what I thought about Iran and about Iranians, especially at the angle of Western media, nuclear program, “the nest of terrorism” and “the axis of evil”. When it comes to stereotypes Iranians definitely do not fit to the picture of a bearded terrorist with a machine gun, but when it comes to women it is more complex. Some women are wrapped up in black sheets and they were disappearing behind them when I wanted to take a photo of them, and other women were more liberated and according to the Muslim regime barely covered. As we can see Iran is a beautiful country and worth a visit.

I also had a few situations when Iranian women were opening themselves to me. They wanted to temporarily marry me for sex, and other ones told me about their sexual fantasies and asked me to bring them vibrators. Personally I think that Islam is a sick ideology and fortunately a lot of Iranians have also sober minds and think that too. A lot of Iranians complained to me about the Islamic regime and admitted they that were honestly sick and tired of it. This means that the Islamic Republic of Iran is very divided.

In a country where people can’t drink any alcohol and can’t dance, in a country where a lot of young women say that they look stupid with they heads covered, and in a country of openly controlled internet where Western media get through to the young people anyway, in my point of view sooner or later it could lead to a civil war.

Iran is therefore a beautiful, rich in art and culture country which I think I’m going to visit again, although before going I recommend immunizing yourselves against a total nonsense which Islam in the Iranian version definitely is. Iranian media forcibly promote Islamic style, the government builds more mosques even though they are a lot of them already, women are wrapped up in black sheets, and in the street it is impossible to not hear loud prayers five times a day.

Even though in my point of view the Iranian nation is smarter and more civilized than a lot of other Muslim nations, I’m sure that because of the never ending propaganda there are a lot of those who would fight for Islam at the cost of those people who want freedom from Islam. 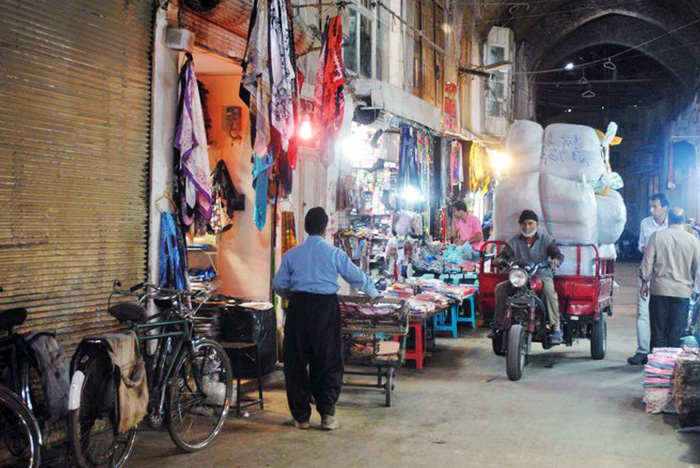 In Iran there is “the bazaar culture” deeply rooted in the Persian culture. I advice tourists to come in, lose yourselves in chaos of bazaar, taste Persian delicacies, have tea in a carpet shop and try to find a way out from the labyrinth of shopping.

The ‘truth’ in Iran and Europe is shaped by the media

It is very important to not to judge Iran and its people through the picture of Western or Israeli media, because it would be an opinion build on lies. Regardless of what our media say Iran is safe and Iranian people are always friendly, what does not change the fact that there is no perfect country and in my point of view there is no country which would be totally free. In Iran people are constantly brainwashed with Islam. Contrary, In Europe we have to believe the far left governments and their utopian idiocy called the multicultural society, and the system glorifying the plague of homosexuality. A lot of things in both Iran and in Europe don’t make sense and not everybody agrees with their governments. This doesn’t change the fact that regardless of views, travels educate and develop.

My trip around Iran

My trip around Iran was a beautiful, epic adventure and in almost 1,5 months I saw a lot of ancient cites and unique art. I crossed a hot desert in the Persian Gulf where after tough lonely life I got to a canyon with a water well. I spot wild camels on a road, I admired silk shawls and hand made carpets in Esfahan, I tasted culinary specialties of Persia, traditional sweets and dates, and I got lost into chaos of ancient bazaars. Current Iran however is not anymore what you could read in the “Tales of One Thousand and One Nights”, I didn’t meet Aladdin or Sinbad and Gin of the lamp didn’t make my three wishes come true, but I think that every traveller will be able to find a fairy tale beauty of this country in their way own way. I entered Iran from Armenia and I started from Jolfa just to go to Tabriz on the next day.

Then I went to Qazvin where police kept my passport and detained me for few minutes for taking photos of them. I also went to Tehran where I spent about a week, and soon after I was climbing Mt Damavand but due to lack of equipment only to 4200m a.s.l. I also went to such beautiful, rich in history and art cities as Esfahan, Yazd, Shiraz and the nearby Persepolis. I visited a few thousand year old villages like Masuleh, Abyaneh and Kharanaq, and I also went to Kerman, Tabas and Mashhad. I crossed deserts, beautiful mountains and valleys and ones I even stopped in a beautiful oasis called Ezmirghan. 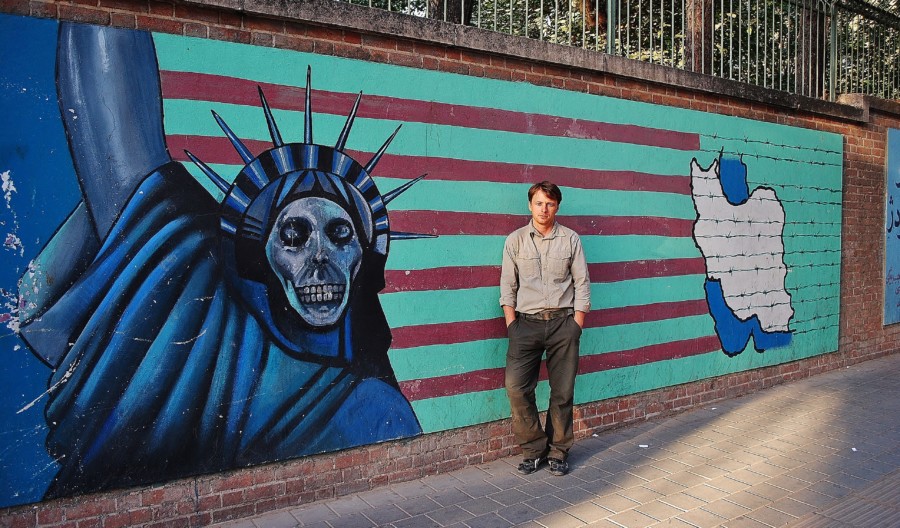 After 1.5 month of travelling around Iran I had a feeling that hatred to America is an artificially inflamed stench made by the Islamic radicals. To most Iranians it is just an element of pop-culture, and a lot of young people would like to go to the USA and live far away from Islam. When I was outside the former US embassy in front of “Down with USA” someone shouted: “that`s bullshit” and few others laughed. There is also an extreme organization in Iran which comes out to the street on Fridays to shout about how they hate America, and many people around them stand and laugh at them. However American media like showing only the US haters on TV because sooner or later it would mean a great business. This way the game which American citizens deeply believe in still continues and so they fight the “Axis of Evil”.

Each of those places offered different attractions although at the same time in the cities I encountered the same things. Iran means especially: mosques, bazaars, carpets, art, kebabs and gardens. In each one of those cities people looked for contact with me and o certain occasions I went out with Iranian women for tea to listen to their opinions about Iran and sometimes listen to sexual fantasies, what tells me clearly that women there feel more liberated when talking to White men. Iran is a very big country that’s why to all those places I was getting by night buses or by hitchhiking.

For example in the Qeshm Island in the Persian Gulf I was moving around by hitchhiking and around Tehran by the underground. I managed to find the right way every single time even though not many people in Iran can speak English. Sometimes the most adventurous transport turned out to be trucks taking me from an empty road in a desert and going towards Pakistan. This happened for example in the sandstone formations of Kaluts where from I travelled to Bam, and where trucks are often stopped for a drug search.

After almost 1,5 month expedition around Iran or Persia if someone prefers that name, I want to say that the country has great capabilities for developing tourism. It is very rich culturally, attractive to travellers for many reasons and it has nice people. Iran however is a country which requires time because it is so big, and what is extremely important I think that every traveller should learn how to separate the traditional culture of Persia from the Islamic Republic, because these are the two completely different worlds sentenced to live together. Tourists should have enough time to mentally embrace to them the new world and should let the Persian carpet sellers to invite them for a cup of tea, which in Iran represent a completely separate, a very extensive chapter. 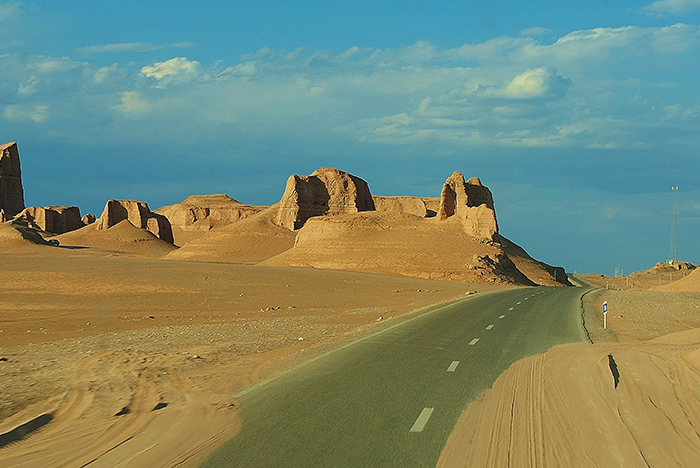 Whilst drinking tea in a carpet shop built about 200 years ago we can then admire the beautiful Persian art and later watch the sunset above the Khomeini square in Esfahan. If we buy those carpets it is even better for us and for them, although there is a lot of art in Iran.

I strongly recommend Iran although I recommend even more the still very much alive ancient Persia!!!

I have thousands of photos and a big backpack of experiences from Iran which I’m going to describe in my detailed 2013 Iran travel journal. I hope it will open people`s eyes to a lot of things. I recommend Iran with all my heart.

The philosophy of truth and deceit; part II – “Political lies as a way of manipulation of logical thinking”