Malaysia is divided into the West (Peninsular) and the East (Malysian Borneo), and it is cut by the South China Sea. The Malay Peninsula, as well as the states of Sabah and Sarawak offer a lot of tourist attractions. Malaysia has beautiful beaches, jungles, national parks and wonderful natural peculiarities – as well as interesting post-colonial architecture, temples and good food. Everyone would find something to love in Malaysia.

The long-awaited return to Malaysia

I had to wait eight years to see Malaysia again, but luckily I got there at the end. When I was there in 2004, I could say that I visited Malaysia just for a short while. This time, however, I was going to spend there approximately 1.5 months and travel West Malaysia (Peninsular Malaysia) in depth, and East Malaysia (Borneo – the states of Sarawak and Sabah). 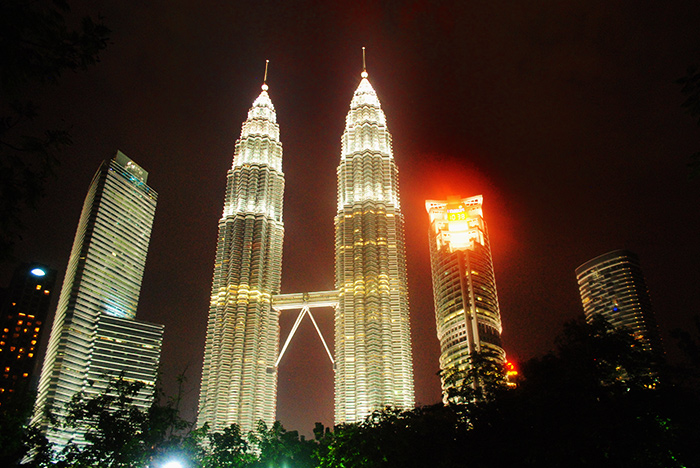 I started from West Malaysia, crossing the border from Singapore into Johor Bahru. For more than three weeks in West Malaysia I saw the most beautiful areas of the country, and from my experience, I believe that West Malaysia is a combination of culture, history, modern world and an amazing natural beauty. I went to Kuala Lumpur, where I saw a modern, illuminated at night city and its most famous building – the Petronas Towers (once the tallest building in the world).

I also went to Malacca, which blends post-colonial architecture combined with Malay, Chinese and Indian cultures; and a very good food. West Malaysia also abounds in great natural beauty, and for example, I went to the Perhentian islands, surrounded by a beautiful coral reef, jumping with sea turtles, sharks and lots of other interesting sea creatures.

I explored Taman Negara National Park, where I took part in a two-day trip to the jungle. I slept in a cave, I was fighting blood thirsty leeches, I fell into a mud and spied on the beautiful nature.

Another beautiful experience was Pulau Tioman island, which will always stay in my memory, because of its remote nature. To me Tioman would best described as a paradise free from the mass tourism. There are many wonderful, empty beaches there, colourful fish swimming in the turquoise waters, and a jungle full of monkeys, which I crossed in order to get to the other side of the island. The island of Penang for example I primarily recommend to the culinary tourists. Penang is a great feast of the best of Indian, Chinese and Malay cuisines. 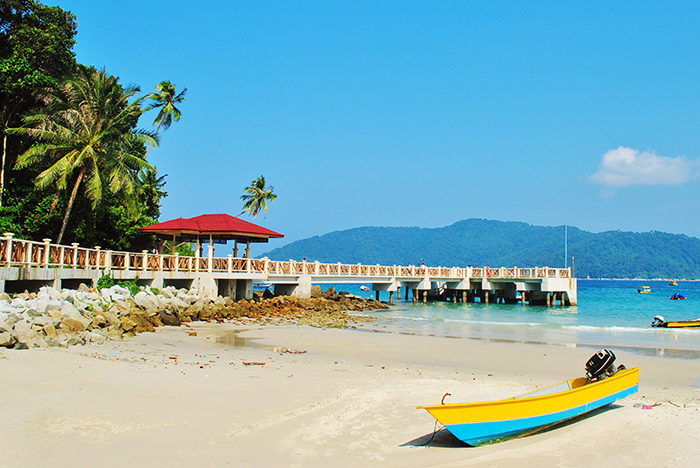 From the center of Penang I got a hitch to the airport and flew away to the beautiful Malaysian Borneo (East Malaysia). I landed in Kuching, the capital of Sarawak, where I travelled in search of natural beauty. I went for example to the Bako National Park, where I crossed the jungle, I swam between high rocks of the sea, and watched the monkeys. Bako Park is one of the most beautiful places where among others there are long-nosed monkeys, and green arboreal pit vipers.

I also visited the Semengogh Orangutan Rehabilitation Centre. This experience gave me a great deal of orangutan observation. I watched the “forest people” during their meals and care for the young orangutans in the wild. Then I went to the Gunung Gading National Park where I saw the largest flower in the world, named Rafflesia, which grows for almost a year, to bloom only for 5 days.

Then I visited the Damai Cultural Village, where I saw the ancient art of building homes made of wood and straw, and where I learned to shoot arrows from a long bamboo. It is a necessary skill to make sure that hunting in the jungle is always successful. 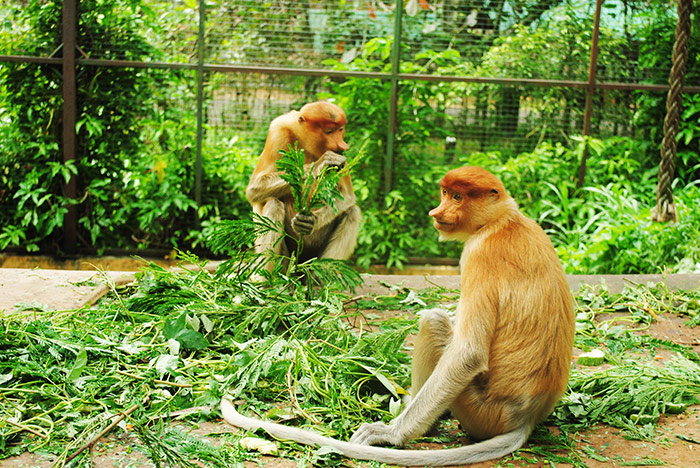 One of the greatest experiences to me were the Niah and Mulu National Parks, which are the worldwide phenomenon because of the huge caves. In addition to it, it is an area of beautiful nature, and in the Mulu National Park, there is the largest cave in the world, and many smaller ones but also very interesting. I swam in the turquoise waters underneath waterfalls and I climbed the highest peaks. The state of Sarawak of East Malaysia I will always remember as the close encounter with the natural beauty. It is an interesting thing to say that you should always ask if there are crocodiles in the rivers, because there have been tragic accidents in many places!!!

Then going through the Sultanate of Brunei, where I also entertained myself for a couple of days, I sailed to the state of Sabah. I had my base in Kota Kinabalu and it was beautiful, but unfortunately I had no time and I had to go back. In Sabah I was going to climb the highest peak of Borneo – Mount Kinabalu, but I simply run out of time, even though I had extended my trip for another week. I’m going to go back to Sabah in two years on the way from the Philippines.

Traveling by boat in Malaysian Borneo, I returned once again to the island of Labuan, which is a duty free zone and also offers picturesque views and the Bird Park. 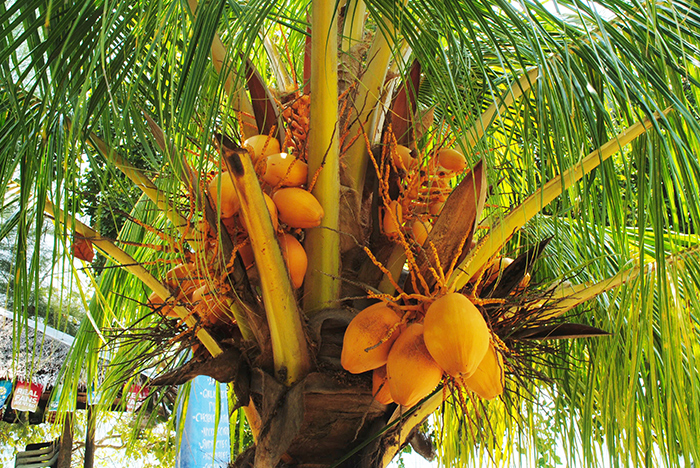 Coconuts straight from the palm tree are a very healthy and naturally cooled drink in the tropics.

I also went to the nature park of Lok Kawi, where once again I was nicely impressed by tigers and the proud citizens of Borneo – long-nosed monkeys (Proboscis monkeys).

I also went to the marine national park of Abdul Rahman, where I spent a whole day on soaking in the warm turquoise waters, I was jumping from a bridge in the schools of colourful fish, and watched huge monitor lizards. One even went into the sea and swam close to me. 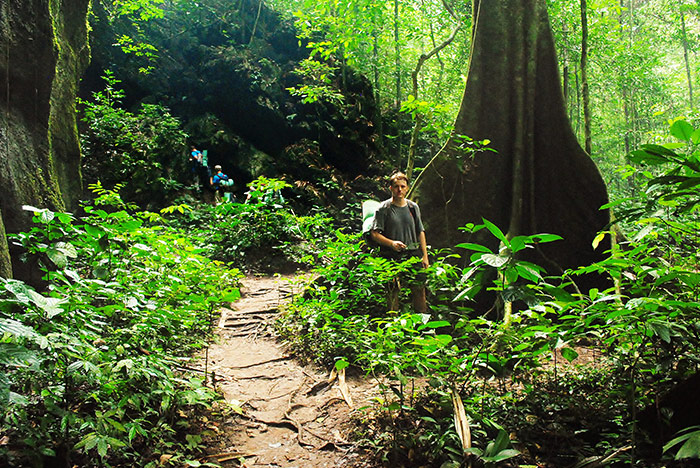 Borneo is a great experience close to nature and the whole of Malaysia is a beautiful and peaceful country. It is much quieter than ‘occupied’ by mass tourism Thailand. Malaysia is a bit more expensive than neighboring Thailand and also beautiful, but maybe even more beautiful.

Malaysia is a Muslim country, which I have nothing against, as long as Islam remains only in the Muslim countries. The Malaysian version of Islam is pretty mild and it is definitely not a case of mental illness or national hysteria, as it is for example in Pakistan and Saudi Arabia. This allows for a stress free natural beauty and a cultural experience, in this very interesting and a beautiful country, where I took several thousand photos. 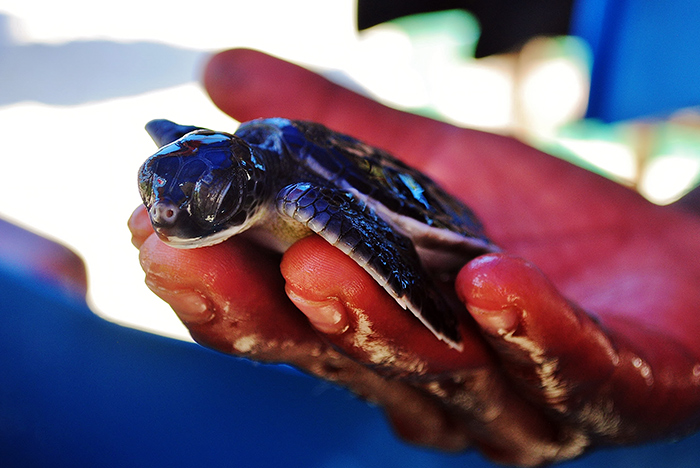 Sea turtle on Perhentian Island, where the locals protect them.

I warmly recommend Malaysia to all nature and food lovers!