To all those who use my website I’m sending my best wishes from Uzbekistan. This country is sadly the last during my quest around Central Asia, but it does not mean that it is worse or less important.

Uzbekistan is a true pearl of the Silk Road what now can be seen in cities such as Samarkand, Bukhara and Khiva. These are mainly religious buildings from the XVI century; such as madrassas, mosques and minarets, but also old universities and commercial places. Unfortunately almost nothing from the time before the Mongolian Empire has survived because Genghis Khan turned to dust everything on his path. Either way the Silk Road was flourishing after his “tournee”. For this reason I could still see the beautiful, skillfully restored old towns. I think that my gallery from Uzbekistan will be very interesting because beauty of those cities and the precision of even the smallest details are extraordinary. I entered Uzbekistan from Tajikistan to first see the beautiful city of Samarkand and its old town center in Registan. After three days of fulfilling myself with local art and architecture I went to town of Bukhara, which is also a beautiful display of art and architecture. Then after conquering Kyzyl Kum desert I got to city of Urgench where from I took an extremely slow and quite painful transport to glorious Khiva. This is the third on my way beautiful old town, full of mausoleums, mosques and shops with local art and products.Because I’m travelling the Silk Road, silk and all products from it are very popular. These are: carpets, dresses, scarves, satiric paintings and sculptures.For example I bought a painting of a man and a drunk donkey looking into each others eyes and struggling for a bottle of wine. In reality there is enough exploring and enjoying the local beauty for many days. Although Uzbekistan is a cheap country and the biggest banknote in 1000 sum which is worth only 45 pence, there is a lot of money here to be  spent.

After seeing the three wonderful cities I drove again through Kyzyl-Kum desert and got to Nukus, which is the capital of the also Uzbek state of Karakalpakstan. In Nukus I had a pleasure to be in the Savitsky museum, which is the best museum of Central Asia. In Nukus there was also an interesting bazaar where I could once again see the openness of Uzbeks to Polish tourists. Some people just didn`t want to be photographed but it wasn’t surprising. Many of them had to grow up in the company of the KGB. From there I went to a rather dull village of Kungrad but I gave that place a chance and it was very nice. I was lying on a bed on the street sipping green tea and eating samsa, which is a good Uzbek dumpling. From Kungrad I went to the village of Moynaq to spend one night next to the wrecks of fishing boats, which were rusting on the steppe. Not as far as 40 years ago there was Aral Sea in that place and today there is only a desert. Moynaq was a terrible proof of environmental disaster of the Aral Sea, which today is located about 170km from its original shore. Then travelling over 20 hours by train through the Kyzyl Kum desert, I got to the capital of Uzbekistan, to the city or Tashkent. I was sightseeing, talking to people, doing  shopping for women and I was eating local delicacies. This was obviously a mutton skewer with onions (shashlyk) and plov, the culinary pride of the Uzbek nation. 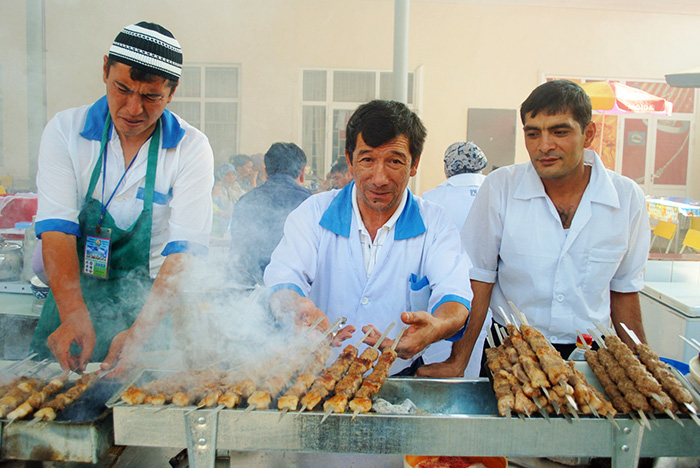 Kebabs in the capital of Uzbekistan, in the city of Tashkent.

I also fell in love with the Uzbek black market. In banks they paid 1600 sum for a dollar, and in bazaar, stations, and even near public toilets as much as 2200. The black market in Uzbekistan was superb and I was always getting along perfectly. I also mastered Russian quite well.

My beautiful trip around Uzbekistan and Central Asia is coming to an end. Although it`s not easy, and although I had to sweat and get dirty all the time, I wish everybody adventures as beautiful as I mine.