Return to the Labuan island

Return to the Labuan island

Description of my trip around the island of Labuan in Malaysia. Labuan is a duty-free zone off the coast of Borneo, which is also an interesting tourist destination.

I went to Labuan island in 2012, during exactly the same route. I was traveling from Brunei to Kota Kinabalu in the state of Sabah, that’s why Labuan was an obvious stop-over. One can also get a bus from Brunei to KK, but it takes a long time and there are a lot of checkpoints along the way. Labuan is therefore a very convenient place for a stopover …. which took me almost three days. I was also curious about what has changed in 6 years, and I must admit that Labuan has been improved quite well. Where there used to be just a few houses, today there is a new town and a bus station, and where there was only a beach and a clock tower in 2012, today there is a street market and shopping centers. There is no doubt that Malaysia is developing at a rapid pace. My aim this time was to make my trip to Labuan much better than the last time. 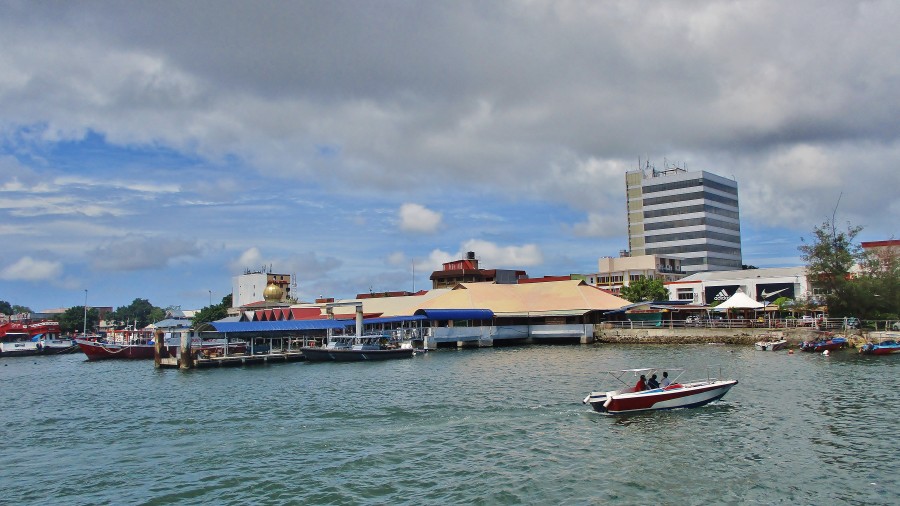 A view of Victoria from a boat, the capital of the island of Labuan, while getting to the shore.

I describe Labuan island as a separate territory of Malaysia, because it is a very specific island. Labuan forms one area with six other, very small islands. Despite its location, Labuan is neither part of Sabah nor Sarawak. Labuan is a federal territory administered directly by the government in Kuala Lumpur, but located off the coast of Borneo, near the state of Sarawak and Brueni.

Labuan Island, which is a duty-free zone, has very favorable economic conditions and transport routes. There is an airport and a harbour here, from which travellers can get to many parts of Malaysia and Brunei. When approaching Labuan by boat, I saw that the presence of oil and gas industries, and there is also a shipyard on the island where ships are built. The small Labuan, covering 92 km² and with a population of around 100.000, is a small financial and energy center serving the entire Asia-Pacific region. To businessmen who wish to do business in Asia, I advise to get interested in Labuan and register their businesses there. For sure it would be easier, and such exercise would save money. 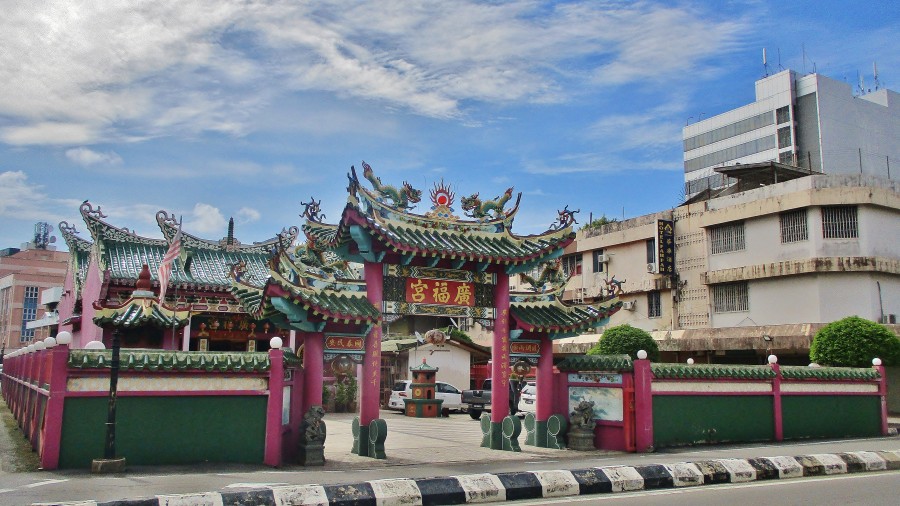 In addition, Labuan is also a popular island among the residents of Brunei and Miri (Sarawak) and Kota Kinabalu (Sabah). Labuan is also visited by foreign guests, and even from countries as beautiful as Poland. Of course, I would be bored to death if I had to look at shipbuilding factories or oil barrels, that’s why luckily there are also beautiful and interesting places to see in Labuan.

After leaving the port in Victoria, I looked around and didn’t recognize the place, which I thought I remember so well from 6 years ago. A new, renovated small town was right in front of me, and the port building was also new. First, I sat in a Chinese restaurant and had a Chinese style chicken, and then walked along small streets looking for a hotel. Finally, near the Chinese temple and the bus station, between the row of shops I found a hostel where I paid 30 RM for a small room with a ceiling fan. It was a nice neighborhood.

Next to it there was a village on water, built on wooden posts, well-stocked restaurants and shops, and an impressive Chinese temple decorated with dragons. There was also a channel nearby, where I was able to see a large monitor lizard, which then I saw every now and then. In the evening, Malaysians would set up their stands and sell drinks, desserts and other Asian specialties, often with the use of coconuts. 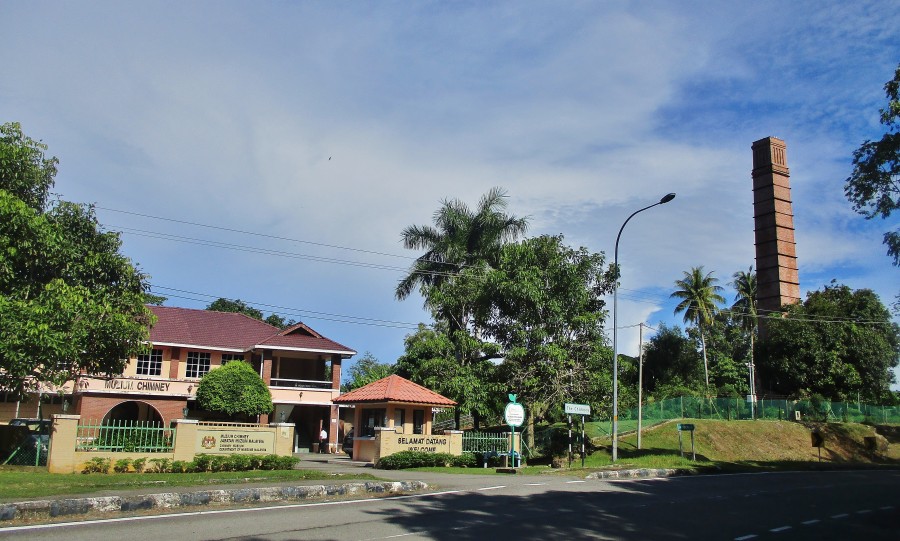 The Chimney Museum and the Chimney Tower in Labuan island.

Things to see in Labuan island

Whilst in Labuan I took a few trips. The first one was on aboard of bus number 6 from the bus station, to the Chimney Museum, next to the Bird Park. The Chimney Museum was an interesting, small museum showing the history of coal mining in Labuan in the years 1847-1911. In the former school, on two floors, there is a history of coal mining, and at the bottom an interesting exhibition showing the underground corridor and people at work. An important part of the museum is the Chimney Tower, which is a historical landmark and a remnant of the coal mining era in Labuan, initiated by the British. 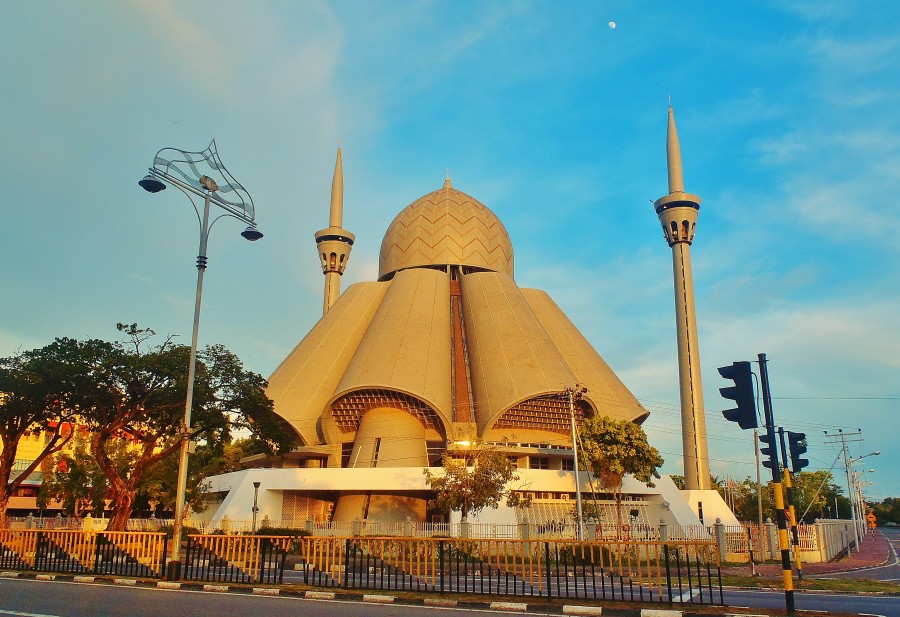 Mosque from “Star Wars” on the island of Labuan. It looks as if it was getting ready to take off into space.

A few steps away from the museum there is the Bird Park, where I spent a very nice time watching many species of birds endemic to the island of Borneo, and which can be seen only in the deep jungles of Sarawak and Sabah. Among many great birds I saw hornbills, cockatoo, kingfishers, peacocks and my favourite – crowned cranes. Majestic, elegant birds, though very territorial. When the female was sitting on eggs in the nest, the male behaved aggressively. He spread his wings, opened his beak and attacked me. The crowned cranes were without a doubt the most beautiful, although hornbills were also a pleasure to watch. One of them always came to me when I was whistling at him.

The Bird Park is in my opinion an obligatory place in the Labuan island, because in the area of almost 7 hectares there are many huge aviaries with exotic birds. Let’s remember that for contact with the nature no-one is ever too young or too old, and also never too serious. The entrance is cheap. I only paid only 5RM. 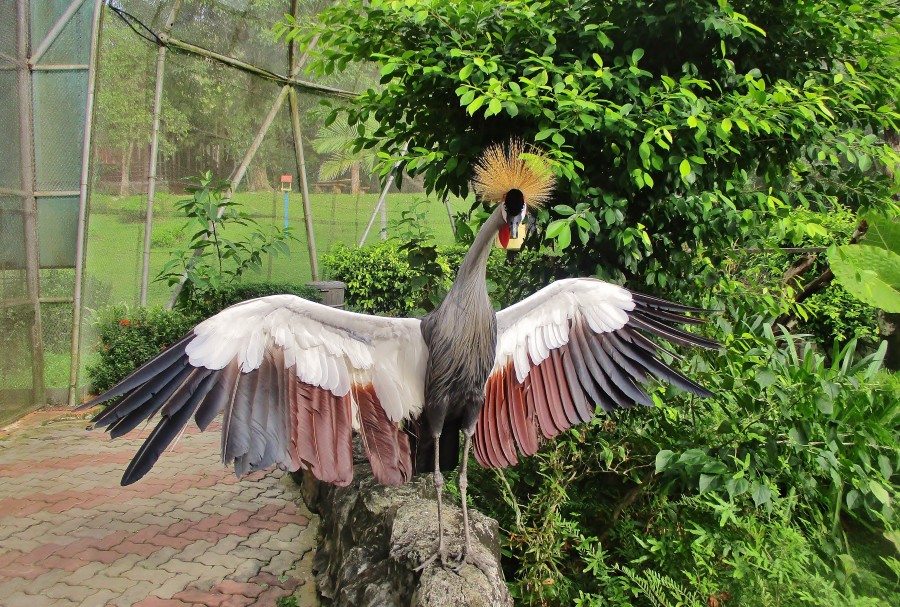 A crowned crane in a fighting position, in the Bird Park on the island of Labuan.

I returned to the center of Labuan hitchhiking, on the way getting off in front of a mosque, which looked like a warship from Star Wars. In my opinion, it looked like a Darth Vader’s helmet, and its 2 minarets looked like lasers from the Impere Strikes Back. Then I walked around the streets of Labuan, stopping at street stalls with food. Also, young Malaysians from the University of Kuala Lumpur interviewed me about what I though about Malaysia and Labuan. Well, I think about their beautiful country in a very good way. The only thing I do not like are palm oil trees, because orangutans lose their jungles because of them.

On my last day I went to the Peace Park, by the sea. The Peace Park has a historical value, because there is a monument there built by the Japanese, who in that way wanted to apologize and express the desire for peace between Japan and Malaysia. The whole of Borneo was occupied by Japan, and whilst travelling around Borneo I saw many monuments commemorating the Japanese surrender to the Australian troops. A similar place, but much bigger, I saw a few weeks later in Sandakan. 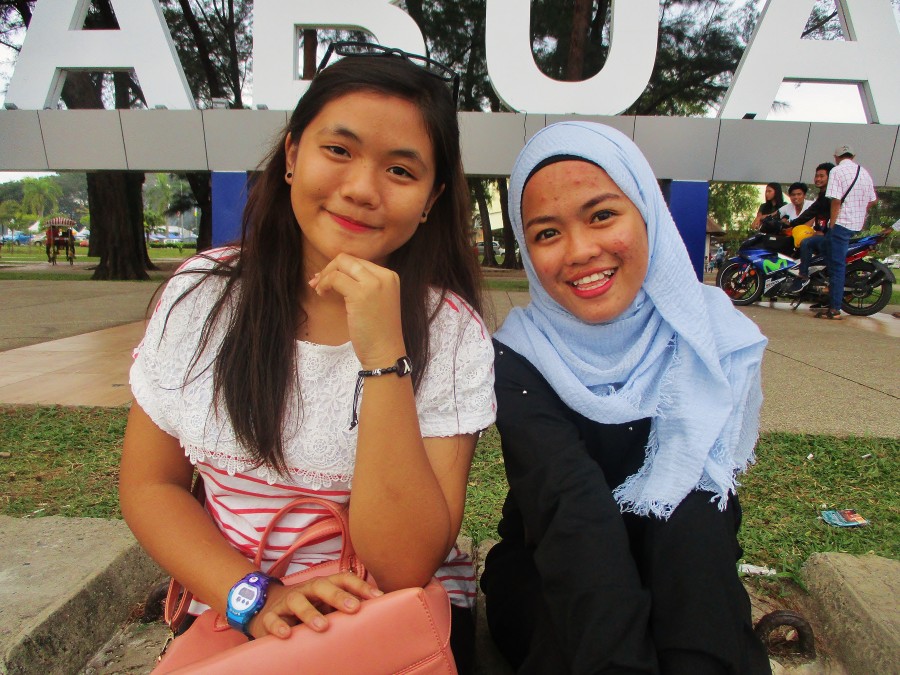 Muslim girls on the beach in Labuan.

However, to not make it so sad I would like to add that after the Peace Park I went to the beach, where I walked on white sand, I swam in the sea, and then I enjoyed a delicious Malay dinner under big trees, which huge roots served as benches. Whilst eating grilled chicken wings and sipping a coconut, I thought about how good it was for me in Labuan. It rarely happens that I return to the same place twice, but this time it was worth it.

In the evening I went to the beach near the clock tower, where 6 years ago stood only this tower in the green field. Today however, this place is full of life. There are bazaars, shopping centers, street vendors and children on roller skates, riding along the promenade. It also occurred to me that if the British Empire was really so bad, then why are these people so happy, why trade and industry blossom in Labuan, and why there are monuments in the honour of the Australian army? I would like to ask this question to the promoters of White Guilt in England. 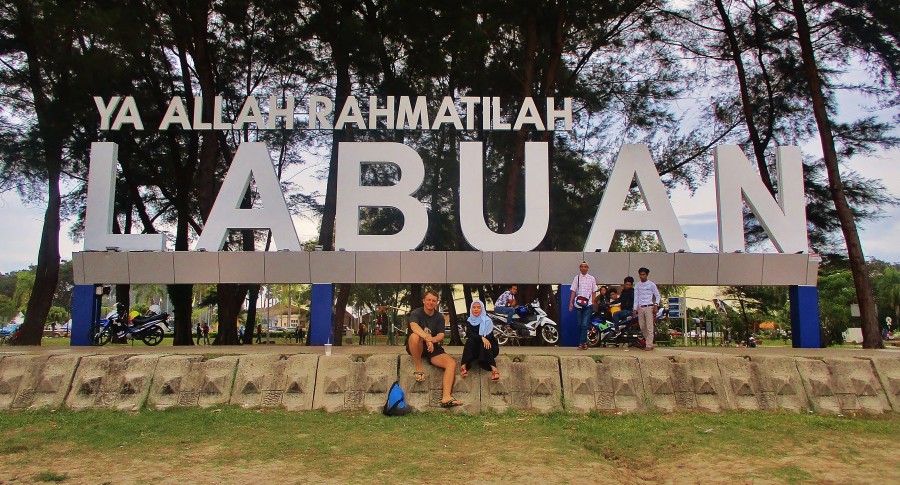 On the Labuan beach.

I spent my last evening calmly, tasting Malay and Indian delicacies, and strolling by the sea where I talked to fishermen. The next morning, I looked again at the water village, I looked at the Chinese temple and the big lizards in the canal, and I went to the port. I went to Kota Kinabalu, which cost me 39RM and it took 3.15h.

I warmly recommend the island of Labuan.

Trip to the Philippines 2018