Traveling in Myanmar, or Burma, if you prefer, is an epic adventure in the Buddhist country of golden pagodas. Myanmar strikes with its cultural richness, and not only in the ancient Bagan or the Shwedagon Pagoda in Yangon. Inle Lake is also very valuable because of the cultural life of the Burmese.

I’ve been travelling around “the land of Golden Pagodas” for about a month and it is a fascinating adventure. Last time I was in Burma in 2004 but far too short, that’s why this time I wanted to see Burma at its best and spend enough time there.

Not much has changed during the 7 years but a lot has happened. There was a cyclone in 2008 which devastated Myanmar (Burma). There was also a revolt against the military regime, the massacre of the monks and the so-called ‘free elections’. Also the capital and even the national flag have been changed, but nothing has been done for the good of the people. Anyway, Burma is a wonderful adventure and at this point it is the most important thing to me. Details of the Shwedagon Pagoda – Myanmar.

Apart from the regions where the military ‘evicts’ population or forces farmers to grow opium, and beyond all the border areas where there are concentration camps for those who do not like the regime – to tourists Burma is a very safe country. People are nice and they always try to help tourists as far as their knowledge of English enables them – not much that is. Travelling around Burma takes forever because the transport and the roads are rather poor, and there are not enough roads to be able to move around faster.

The food is pretty good and does not immediately force to the toilet (a hole in concrete), like in India. For a room I pay on average about $4 – $5 with breakfast, so ‘I`m a great spender’. The least I managed to pay was only $3, although that price still doesn’t have any comparison to room in India and Bangladesh, where for the rock bottom rat infested room I paid only 60 pence … and what an adventure!!! Unfortunately transport in Burma is the most expensive.

In about a month I saw Yangon, the ancient city of Bagan, Mandalay, Golden Rock and Inle Lake, with its famous temples and factories full of silver, cigars, and many other things. I also had an opportunity to see rural life and take a two-day trek through the mountains. Whilst travelling around this beautiful but a very a tiring country, I once again realized that time travel is possible. Farmers use primitive wooden tools, and they use buffaloes to plow their rice fields. They also pose to my photos. 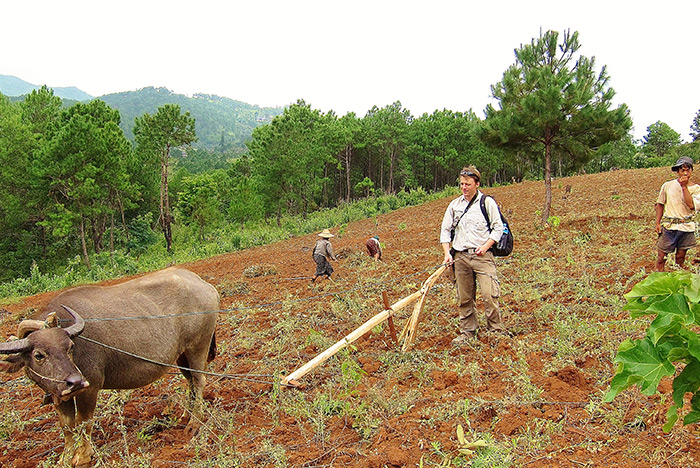 I became a farmer in Burma.

Burma is first of all a great adventure, Buddhist culture, mangoes and papayas picked straight from trees. The rainy season took me by surprise and soaked me completely several times. Golden pagodas, numerous statues of Buddha and huge lions are beautiful, and sometimes even majestic. Unfortunately poverty is very high but in comparison with neighbouring Bangladesh it is still not so bad.

Although it was beautiful and Burma is a wonderful adventure that opens our eyes to many things, I feel tired. Burma (Myanmar) is a third world country with a full meaning of this word.

Overall I am very happy that I’ve been there, 3 times, and I strongly recommend to visit this interesting country.