I recommend all travelers a trip to Laos. To the country where one can take a cruise on the Mekong River, and swim in the jungle waterfalls. The picturesque Laos charmed me with the beauty of rice terraces and many impressive caves.

Last time I was in Laos in 2004, which is seven years ago. At that time I was in this country too short, that`s why now I spent a whole month to get to know the beautiful, adventurous Laos. 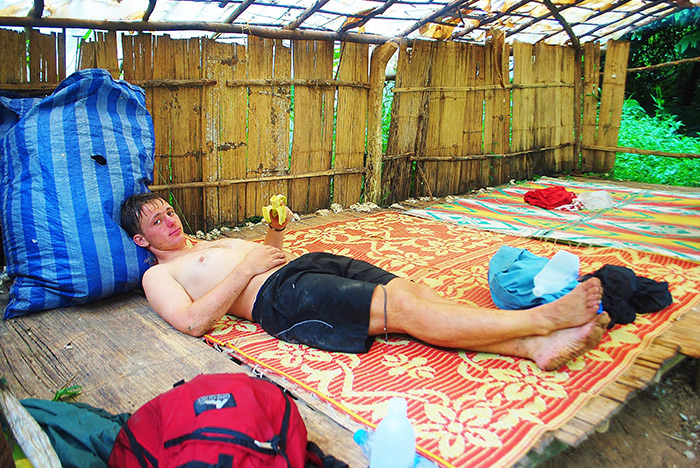 I am resting in a bamboo hut after crossing the jungle, near Luang Namtha.

Things to do in Laos

My adventures in Laos I started in Luang Namtha, where I organized a two-day trip to the jungle. I slept in a bamboo hut covered with banana leaves, I crossed the river without taking clothes off and my guide cooked rice for me in a bamboo. I also visited many primitive villages cut off from civilization where people lived without any achievements of the XX century. A very relaxing experience was also a two-day boat trip on the Mekong river, and then I saw the “Pearl of the Orient” which is the town of Luang Prabang, full of spectacular temples and the nearby waterfalls.

Then, after jumping into the Mekong River from a high tree on the outskirts of Vang Vieng, after exploring the caves and after I went down the river in a rubber tube, I reached the capital of Laos – Vientiane. I also explored the dark 7.5 km long Kong Lo cave (I warmly recommend) and then I visited the ruins of the temple of Champasak, similar in style to Angkor Wat. After visiting many other interesting and beautiful places in Laos I got to Si Phan Don, which are also called 4000 islands. Whilst there I admired the natural beauty and I swam in the Mekong river. From there I also went illegally to Cambodia to watch rare river dolphins in their natural habitat.

I`ve listed here only a few out of many places that I saw in Laos, but the important thing is that this country is a great detachment from reality, where one adventure happens after another. A lot of things in Laos I’ve done very spontaneously. For example when it was very hot I jumped to the Mekong river to cool off, or I dunk myself in a hole in the rice field with buffaloes.

I also think that smiles on Lao people`s faces and general cheer which gives them will to live, is the national pride of Laos which is famed throughout Southeast Asia – BeerLao (the national beer).

People in Laos are usually nice, and although business is extremely important it still happens that someone smiles to me without a charge and says sabaidee (hello). Laos was a French colony, and therefore to this day baguettes are very popular for breakfast which was quite a relief after rice and only rice in Thailand. 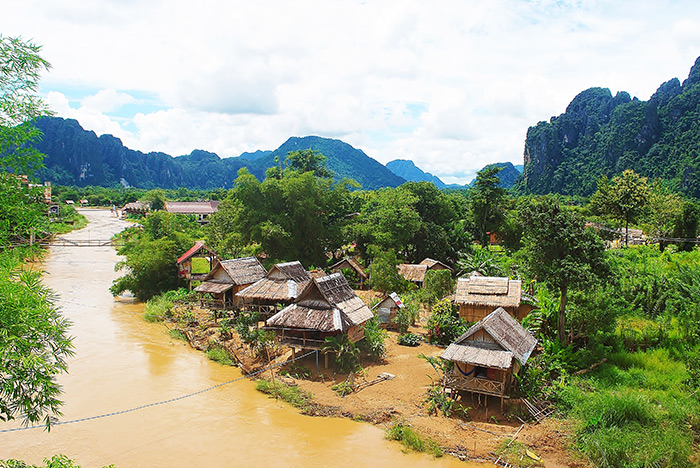 Lao village on the Mekong.

As for the weak points of Laos there is a very poor knowledge of English what made me furious several times. Even in the typical tourist places like Vang Vieng you may be lucky to find someone who can understand you. The older generation speaks fluent French.

Another thing is that in Laos there is no habit of drinking tea or at least it is not as widespread as in India or China. Lao transport is an adventure itself although by the standards of a developing country it is not that bad.

In summary Laos is a wonderful adventure and I believe that every decent citizen should spent at least one month in this country to be able to consider his/her life as successful.