A brief account of my trip to the Sultanate of Brunei. A small, interesting country on the island of Borneo, where one can see tropical forests, nice beaches, proboscis monkeys and a brief introduction to the oil industry.

Last time I was in Brunei in 2012, but only for a few days and only in the capital Bandar Seri Begawan. In 2018 I was just traveling in the Philippines, and at some point my two-month visa was close to expire, and the new one in the Philippines cost a lot of money. For that reason I thought that it would be better if I take the cheapest flight to Brunei, I would spend there for a few days and then go back to the Philippines, where I would get a free visa for 1 month. My visa trip to Brunei turned out to be an extraordinary adventure, because I stayed in Brunei for 8 days, even though I was planning to stay 4 days the longest. After Brunei I organized an expedition to the Malaysian state of Sabah in Borneo, which took me about a month.

My return to the Philippines for a free visa took me much longer than I planned, but it was irrelevant to me, because I had a wonderful adventure at the end of the world.

Southeast Asia has a lot more to offer than just one Thailand. Traveling in this region of Asia is also a culinary journey among the interesting nations of many cultures. 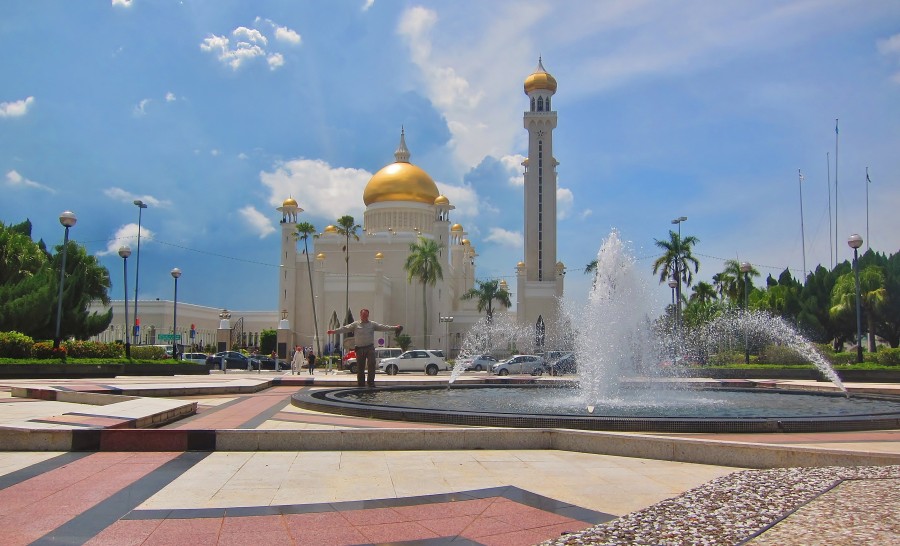 Brunei is an underrated country, often called a „boring oil-rich Muslim state”. It is true that not a lot is going on in Brunei, and that the country’s economy is based on oil. However, Brunei has an attractive small capital Bandar Seri Begawan (BSB), the largest village on water Kampong Ayer, and it also has a river and mangrove forests, with residents such as proboscis monkeys and crocodiles.

Brunei also has a tropical forest in the Temburong exclave, nice beaches, good Malay and Indian food, good shopping and interesting museums. Therefore, I do not agree that there is apparently „nothing to see” in this quiet, peaceful country, and it is certainly not boring. On the other hand, Brunei is not famous for parties too, and it is not allowed to drink alcohol, but it certainly deserves a few days of any traveller’s time. Compared to 2012, when I was in Brunei for the last time, several things have changed for better.

Things to see in Brunei

Whilst in Brunei, the same as before I have my base in Bandar Seri Begawan, and from there I organize trips to the further parts of the country. In BSB I went again to the Sultan’s Royal Regalia Museum, I went to see the Sultan’s palace Istana Nurul Iman, and I tried the Malay and Indian specialties at many restaurants and street stands in the BSB. The people of Brunei are nice, calm and helpful. For example, hitchhiking works quite well, and it is not expensive at all. At least it was cheap for me. In Bandar Seri Begawan I also went on a boat trip to see proboscis monkeys in the mangrove forest, the water village Kampong Ayer and the panorama of BSB seen from the river.

In the BSB for example, there is a new Ecopark; a nice bridge over the river, decorated with baoab trees from Madagascar, and with a view of the Omar Ali Saifuddin mosque and Yayasan Complex. I recommend this place for shopping and meals on the top floor.

Panoramic photo of Ecopark in Bandar Seri Begawan. In the center we can see the Omar Ali Saifuddin mosque, and Yayasan Complex on the right.

My first trip outside BSB was to the exclave of Brunei, Temburong, where the Ulu Temburong National Park is located. Although Brunei is mainly associated with Islam and mosques, to me Brunei is mainly about walking in the primary rain forest, with trails through the jungle and with proboscis monkeys, which live in Brunei in large numbers.

When in the Temburong jungle, I saw a river in the colour of tea with milk, which I crossed on a board of a long wooden boat. Finally, we moored along the trail, which led me several kilometers to the platform at a height of 200m above the ground, from where I saw a vast panorama of the Temburong jungle. I was very lucky because I managed to notice a pair of flying hornbills, which is one of the symbols of the island of Borneo. 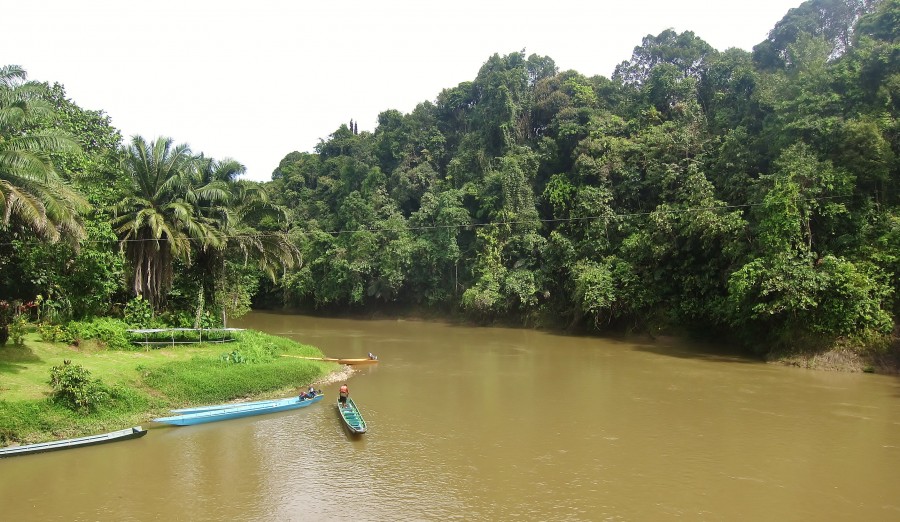 The Sultanate of Brunei is more than just mosques and the oil industry. I took this picture in the Ulu Temburong National Park, where there is a jungle, a waterfall and a beautiful adventure close to the nature.

On the way back we did rafting on the pontoons down the rapid river, and I swam in a natural pool by the waterfall. This is Brunei! Beautiful and adventurous, though I never have enough adventures, that’s why I stayed longer in Temburong to climb the Bukit Patoi peak in Peradayan Park. The next day, in the evening I returned by motorboat through the Malaysian territorial waters to BSB, which took me about 45 minutes.

(By the way, The Sultan Brunei is building a 30km bridge connecting the main part of Brunei with its capital Bandar Seri Begawan – with Temburong, and its construction is to be completed by the end of 2019). 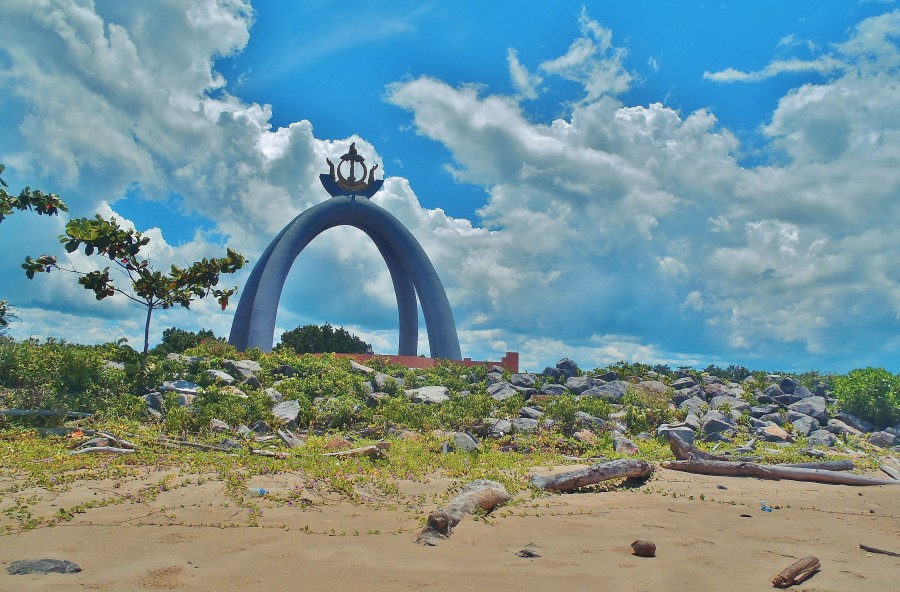 The Billionth Barrel of Oil monument seen from the beach in Seria.

Apart from that I went to the Jerudong Park, and later to the famous monument of money – to the Empire Hotel. The Empire Hotel is a gold-dripping building complex, located amidst beautiful nature. I swam in the pool, then on a private beach. Then I hitchhiked to Tutong, a small town near a nice beach. Brunei has quite a few nice beaches, some of which are suitable for windsurfing because of high waves.

Other nice beaches were near the port town of Muara. One was huge, long and wide, but the other was small and I don’t advise anyone to swim over there because of the company of crocodiles. I also liked Seria town, colonized by the British Shell oil industry; with its monument of the Billionth Barrel of Oil, very interesting factories, oil pumping machines and a museum. I however spent most of my time on the beach.

(By the way, I think that the management of Shell should get a kick in the snout, because the water in Seria is brown and smelly, while in Tutong and Muara located about 40 km away, the water is clean and blue. It is therefore obvious, who in Brunei is the biggest, and the smelliest pig. Of course, the British Shell.)

I visited the town of Seria, which has been colonized by the British oil company Shell. On the left we can see oil pumping machines, and on the right, behind the palm tress, the Billionth Barrel of Oil monument, built to commemorate the extraction of a billionth barrel.

Summary of my adventures in Brunei

In short, these are the most important places that I have seen in Brunei, and I am happy that I have visited this country again. Life in Brunei is peaceful, well-organized and there are enough attractions to keep travellers busy for a few days. I left Brunei by boat from the port of Serasa, near Muara.

Within 1h and for a magical amount of B$17 I got to the Malaysian island of Labuan, where I already spent a few beautiful days few years ago. Transport by boat from Brunei to Labuan is by the way the only type of transport that I advise to people going to Sabah. 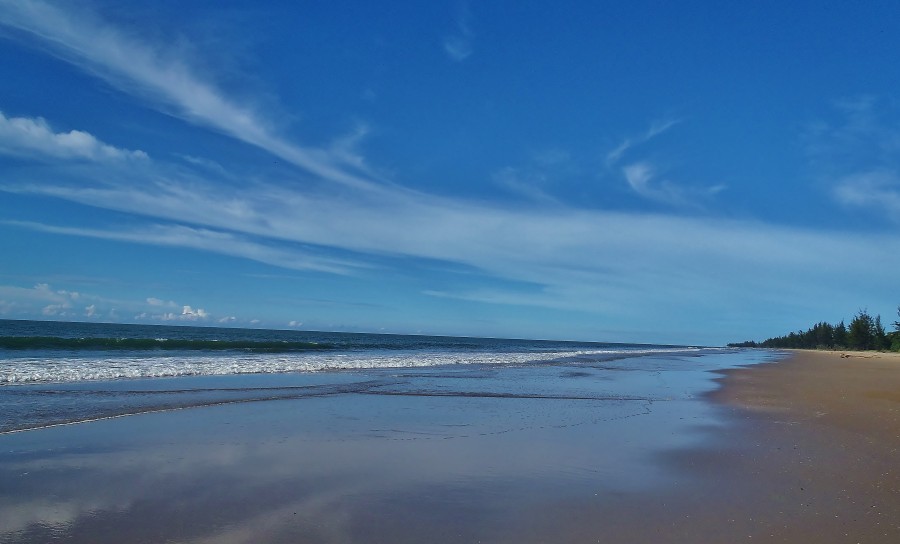 Tutong is yet another very interesting place in Brunei, where one can try Malay and Indian food, or fish around the mangrove forest, or buy a camera. 2km from Tutong there is one of the most beautiful beaches of Brunei, although those who are really thirsty can also knock on the British military base front door and ask for a cup of tea.

Petra – the desert city of Jordan

Adventure trip to the Philippines