My unplanned trip to Sumatra turned out to be a very good experience in terms of human contact. I saw the realities of Indonesia and a huge difference compared to Malaysia and Singapore. People were very natural, eager to talk to the unknown stranger, and the living conditions were dire. My short stay in this world-forgotten, dirty hole opened my eyes to how lucky I was that I could be there, and then that I could also leave. (Indonesia should be never seen through the prism of Bali !!)

The cruise on a happy boat

My trip to Sumatra turned out to be exceptionally good. I was heading for Mallaca but I wanted to experience one more interesting adventure and that’s why I left clean and well organized Singapore and after a 45 minute cruise I got off at the Indonesian island of Batam. When I got there I was greeted by crowds of interested people who were staring at me and getting excited about the White man. The “rock star effect” worked on Batam very well but I really didn’t need that. Finally, when people cooled down they asked where I was going, to which I replied that wherever as long as not there. Indonesians were so helpful that five men grabbed me and took me to the ticket office, where I bought a ticket “somewhere to Sumatra and not far from here.” Indonesians were very nice again in their own way. One grabbed my backpack and the other three threw me on the boat to make sure that I wouldn’t miss the departure. I was happy to leave Batam but not for long.

The floating filth that I was on was as dirty as an Indian slum. Water and garbage were floating on the deck and in general everyone was staring at the White man. The boat was commanded by captain “Nemo” (as I called him) who judging by his dirty clothes had a serious argument with a laundry shop owner. Shortly after departure captain Nemo served water and rice with something spicy to enrich the flavour, but about forks he forgot. During the few hours I answered a lot of questions about my country, I looked at the sea and at the bushes sticking out from water. The engine was making noise as if it was possessed, everyone wanted to make contact with me and I was surrounded by super filth. I had my adventure after all. After a few hours on a boat I got to the town of Dumai and I quickly understood that it would have been better to stay in Batam.

Dumai is located in Riau province in Malacca Strait and it has only about 150.000 residents. It is an oil port and the center of the petrochemical industry although I wasn’t interested in the industry. I wanted to see a new place and see new people. I was just through Indonesia on the way to Malaysia and I have to admit that I wasn’t disappointed with Dumai because it was the type of a rat hole that I was looking for. As soon as I showed up at the port a Muslims herd began to point me out with their fingers and yelling: “American, death to American” and I have to say that I was very changed after that experience. It was the first time I got to know the true nature of goat-lovers. They started grabbing me by the shirt and creating unpleasant crowd so I used the help of a con artist who said that he would take me anywhere to arrange everything, even though all I needed from him in that moment was to get me out of the port in one piece. He was with me and helped me push the crowd away with his elbows and whistled to get the van. We jumped on it and the car drove off with screeching tires showering the crowd with dirt. 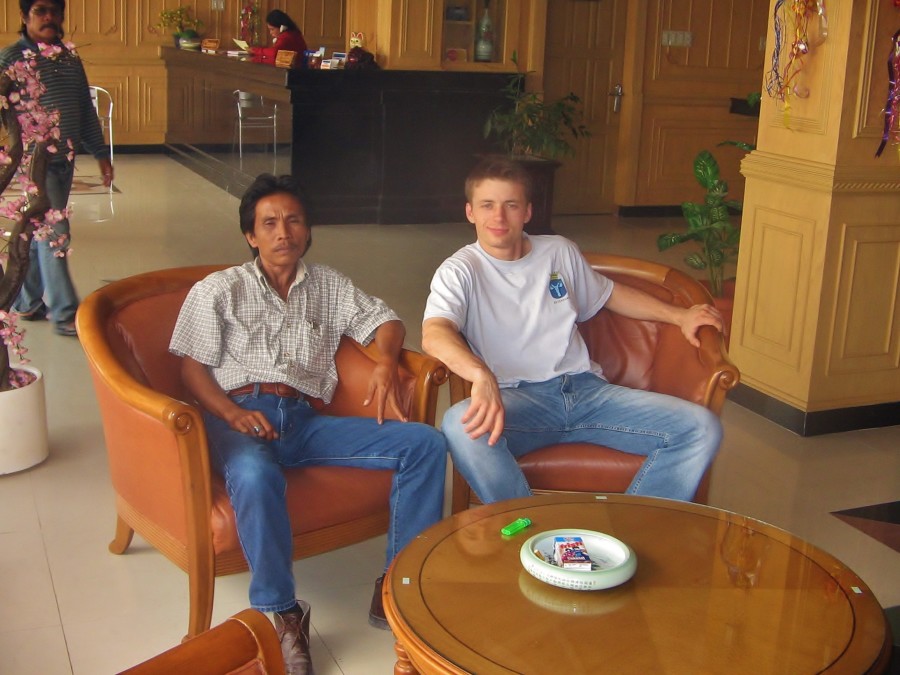 In a hotel lobby in Dumai.

On that day I already experienced two such warm welcomes and I felt that it couldn’t be any worse any more. Whilst getting to the city and shaking on the back of the van I asked the man if he had any plan. He gave me a lift to the best hotel in town which wasn’t that bad but a little expensive for my taste. When asked if there were any cheaper he said that there were cheaper hotels but that one was really safe. The hotel was by far the best well kept building in that creepy little town because just opposite there were permanent barracks with roof panels and palm trees above them. The main street wasn’t busy too. It was an asphalt road with a few cars and rickshaws passing through and barracks on bot sides with a flag of Indonesia in the middle. In the hotel everyone warned me to not to go out especially after dark but on the other hand they’ve been warning my hole life and nothing happened. I have to admit that the people were very nice to me and very curious about who I was. Everyone wanted to shake my hand and they all wanted to talk me, even those who didn’t speak any English. The bank manager was so nice that he opened the back door for me so I could exchange the money even though the bank was formally closed. Women in the bank jumped off their seats when they saw me because as they said: they “saw White men only in American films.” I had no doubt that I became a highlight of the whole town.

I was so popular that even a local faggot ranged my hotel and said that he wanted to come to my room, so I had to explain to him in a very nonsensitive way to stay away. Generally Dumai was very poor. People had their stalls on the pavements and children from the surrounding slums came to watch me like a television. The next day I got on a bus which was half-eaten by rust after a ride on a holey road I got back to the port. As soon as I got there they cheered me up again with a loud “American”, so I helped myself with elbows through the crowd, I bought a ticket and I was already on my way to Malacca. 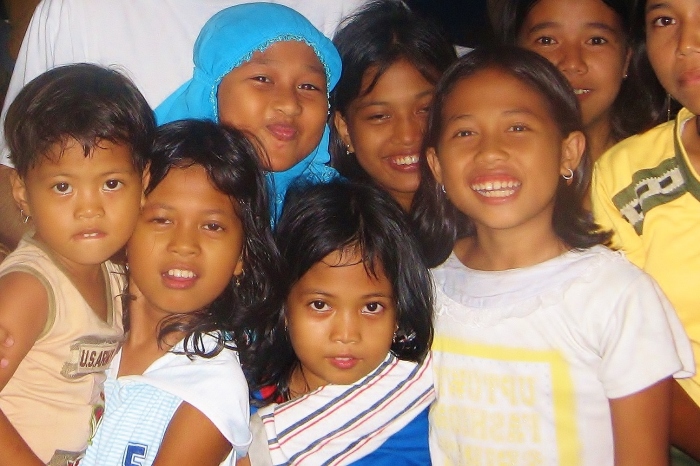 The children of Indonesia.

Perhaps Dumai wasn’t such a bad thing? There is an opinion among travellers that Dumai is only useful for buying a ticket and to get out of there as soon as possible, but I am under a different opinion. Sometimes the least attractive places can provide the best travel experiences. My visit to Sumatra was very short but very educational. I went to one of the most non-touristy, ordinary town in Sumatra and therefore the experience I had made me feel on my own skin how people in this country towns really live. Most tourists board a plane and land in luxury resorts of Bali or Lombok and they have absolutely no idea about the Indonesian reality. My travels on the other hand, rely on realism and my experiences there, people’s reactions to a White man, poverty and desperate faces of children would remain in my memory for a long time. My time in Indonesia was educational, adventurous and crazy.

At the end I want to remind the tragedy that occurred only a few days after my departure from Southeast Asia, because if I had left a few days later I would have probably died. On the 26th of December 2004 there was an earthquake 30km beneath the Indian Ocean close to the northern Sumatra, so close the town of Dumai. The earthquake triggered tsunami waves which in a few hours hit several countries in southeast Asia, south Asia and later in Africa. Waves reaching 15 meters in height were moving with a speed of a flying airplane and devastated coastal villages and towns as well as islands visited by foreign tourists. The tsunami caused the greatest destruction on the coast of Indonesia, Sri Lanka, India and Thailand. Smaller destruction was recorded in Malaysia, Burma, the Seychelles, the Maldives, Bangladesh, Madagascar and Somalia. The number of dead and missing amounted to at least 275.000 people but this is not the final scale of the tragedy because millions were left homeless and 150.000 were infected with serious diseases. It was calculated that that tsunami was the third most powerful in history of the released energy was equal to the force of 22.000 nuclear bombs dropped on Hiroshima. Apart from that waves moved 5.000km into Africa still causing damage and killing people, although Indonesia was affected the worst. 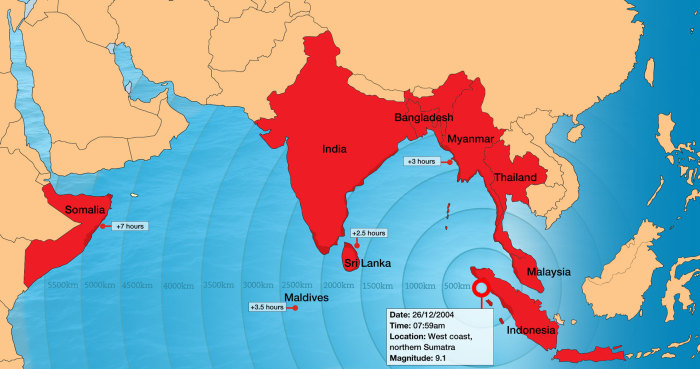 The scale of tsunami destruction in 2004. I ran away from that tragedy just a few days before it happened.

At this point I remember all those people who I met and all the poor, laughing children who are most likely dead. As I mentioned earlier the tragedy occurred on December the 26th and I left southeast Asia on December the 22nd. It was so close…….