In this chapter I would like to discuss travel health requirements, which are necessary to take care of, before going to the farthest corners of the world. We can be very well prepared for our journeys. We can survive Himalayan cold, desert heat and the surrounding filth of developing countries. But no matter how much enthusiasm we have, and no matter how confident we are about our ability to travel, let`s not let our conquest of the world to be stopped by a mosquito bite or a cat scratch. Generally there are a few things we have to take care of before we go, and I advise everyone to take health very seriously.

Health during travelling depends mostly on common sense, although in the flow of emotions it is easy to forget about taking care of yourself. Some things should be done before you go, and other things should be taken care of regularly during the trip. Here is the overview of the most important health issues:

After the outbreak of the Covid 19 plan-demic, I have mixed feelings about certain vaccines. The type of flu rose to the name of a ‘global pandemic’, which was an excuse for world leaders to shut down the economy, bankrupt people, lead them to mental illness and suicide. I recommend my article: “Political Virus Covid-19” in two parts. For this cow it is already too late but you may still have a chance if you take care of your health. (The Vulture’s Gorge, Mongolia).

Also, although the map below shows the countries where there is malaria it is very common that even 90% of selected countries are safe. Countries marked in green are risk free, countries marked in blue are eliminating malaria or it occurs only regionally, mostly close to the rivers. However, the countries marked in red are high-risk but even with that I do not completely agree. The worst situation is in India and in Africa. In Southeast Asia I did not take anti malaria tablets but this decision is for every traveler to make as they are also high-risk countries. Especially during monsoon and just after rainfall we can feel the presence of mosquitoes what means that every traveller should approach each country separately, consult the trip with a doctor and then decide. Doctor should advice which medications are the best for specific regions of the world.

Whilst traveling around Asia I slept under a mosquito net, I used spray and bands against mosquitoes and I often wore long trousers and long-sleeved shirts because there are also ways to fight malaria. We also have to remember that there aren’t tablets which would give us 100% immunity to malaria. They only prolong the time from the bite to reaching a hospital to get professional help.

As a curiosity I want to add that wherever I go locals complain about White people, partly for historical reasons and partly because of the White guilt  promotion in the media but it was the White people from Europe and America gave medications against malaria to the poorest countries.

If you have already been poisoned I advise to wait calmly  a few days in a well ventilated room, near toilets, having hot tea and eating boiled rice only. Unfortunately whilst travelling around India I had to go through such nightmare and this solution worked for me very well. There are also water purifying tablets but I have personally never used them. Although Africa is the undisputed champion in all diseases, in Asia the country of filth and all the health complications is definitely India. Nice monkeys but they don’t wear t-shirts with “I have rabies” on it. I advice to avoid animals and not to enter monkey colonies with food and especially not with bananas. During my travel career I’ve had several fights with them and I have to admit that they are willing to fight to the death over a banana peel; and they could infect with rabies. (Sri Lanka).

Rabies exists in 150 countries and territories of the world but mainly in Africa and Asia. The most common cause of death of people are infected dogs which are responsible for 95% of all infections, although risky are also bats, raccoons, skunks, foxes and cats. Rabies is very dangerous and it is usually transmitted by wild animals onto domestic animals through their saliva during bites and scratches. All animals should be avoided because even if a dog is not aggressive and if it doesn’t drool excessively it should be remembered that it may be still infected because the incubation time lasts on average from 2 to 6 weeks. Even cleaning the wound with soap and water can save a life.

On the other hand I’m only good in theory because I provoke monkeys on purpose and I even play with venomous snakes. It is really a very stupid thing to do but I love it! 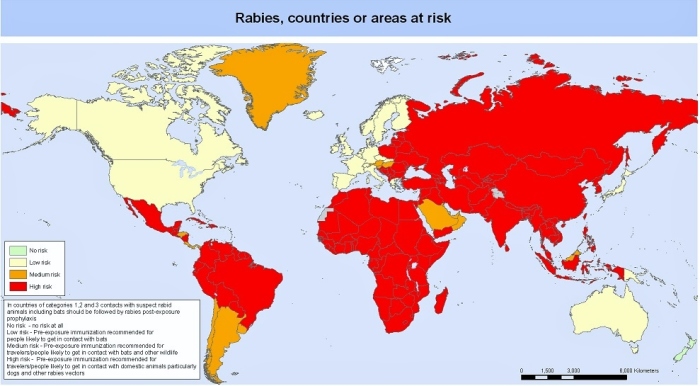 Distribution of rabies around the world (WHO map).

There is a whole list of nasty surprises which at first usually reveal themselves by itching and redness in the „lower body parts”. To get infected by one of these you’d have to „earn it” because these viruses do not come from the air. As a rule I advice to keep an iron promise to yourself that every time and whatever the contact is you will use condoms, although in some countries it may be better to use two at a time and then wash yourself thoroughly in warm water. (Here I was thinking about Asia). In Africa I advice the desperate ones to use a diving suit or preferably to dip genitals in a bucket of ice water before getting on with it. The highest risk people are homosexuals and drug addicts but also those who like interracial adventures.

I think that the best advice to avoid sexual diseases is to travel with your husband / wife and live as the Bible teaches. This is the best protection. 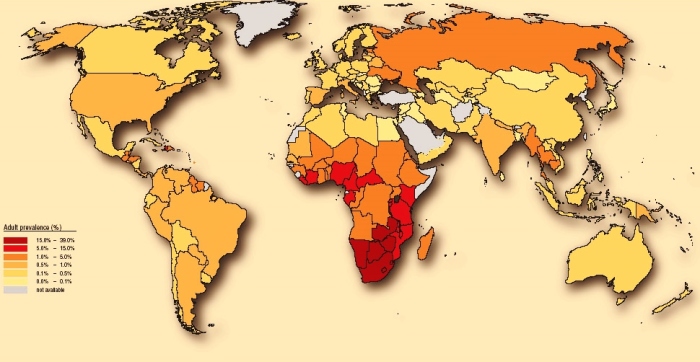 Travellers are always under impression that everything will be always fine but sometimes it is not. Maybe you would like to do a diving course in Thailand or the Philippines but what if the weather changes and you hit your hand over a sharp rock what needs stitching. I could give a lot of examples. Money saving people would have to keep their fingers crossed that everything would be fine. 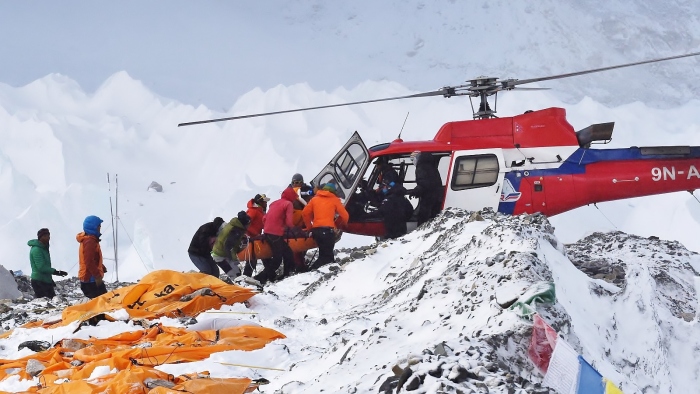 Rescuers in the Himalayas.

I hope these tips will help travelling safer; and remember that the colder the region the healthier it is because some diseases do not occur below certain temperatures and above certain altitude.

I also recommend the climatic zones on my website.