Time was invented by people so it is easier to identify it. Whether it’s a day or a night depends on the rotation of the Earth in the sense of a particular position of the given part of the Earth towards the sun. We invented time zones to make a better use of time in economic terms, and because time zones  correspond to our biological nature.

What are time zones and why we need them

Whilst flying around the world I’ve noticed that people rarely know what time it will be when they get to their destination. When travellers are on the other side of the world they are not sure about the actual time difference and whether it’s the right time to call home and not to wake up parents in the middle of the night. That’s why I’ve attached the map showing time zones of the world. As time “0” I have shown the Greenwich Mean Time (GMT) where the world famous Observatory was founded in 1675 by Charles II. Nevertheless, time zones were invented in 1879 by a Scottish born Canadian Sir Sanford Fleming. Please note the colours on the map and its explanation underneath which show the time differences as we move west or east from Greenwich and note that the standard time zones move by full hours GMT+ and GMT-. 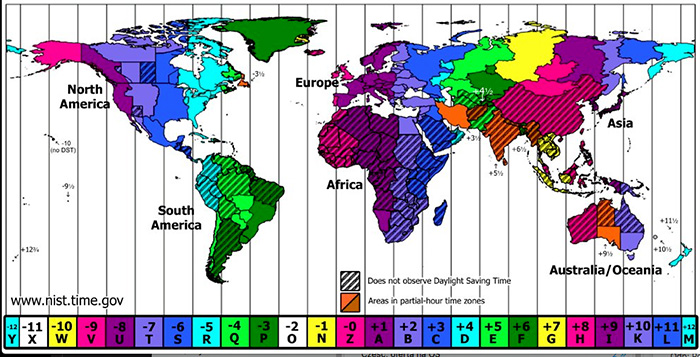 I also want to remind what “time” is. Time was invented by people so it is easier to identify it. Whether it’s a day or a night depends on the rotation of the Earth in the sense of a particular position of the given part of the Earth towards the sun. We invented time zones to make a better use of time in economic terms, because if the entire planet was on the same time the world would not be able to produce enough energy, hence the DST (Daylight Saving Time). Time zones also correspond to our biological nature because we are diurnal animals and they depend on the rotation of the Earth which the total turn around takes 24 hours. That’s why we have 24 hours in a day and 24 main time zones as shown on the map below. Apart from that there is 360 degrees in a circle and that’s why there is also 360 degrees around the planet.

The countries with several time zones

Many time zones have huge countries so those which are cut by more than one meridian. These include: Russia, Canada, Brazil, Australia, Indonesia, USA Mexico and a few more.

Many time zones have also postcolonial European countries which have their overseas territories around the world, such as: France, the UK or Denmark.

As a curiosity, I would like to add that France has the most time zones. With its overseas territories, France uses 12 different time zones, although even 13 if we take into account France’s territorial claims in Antarctica. France therefore has more time zones than any other country in the world, even though the main part of France in Europe only uses one time zone. For example the US and Canada have 6 time zones each.

China is also an interesting country, because it has only one official time zone. Given the number of meridians and the size similar to the territory of the USA, China could have as many as 5 time zones. In old China, between 1939 and 1949 China had 5 time zones, but the new Chinese government abandoned that division, using Beijing as the centre of a country which rules everything, including time.

Russia – time zones of the largest country in the world

Russia is a very interesting country in terms of time zones. After the Bolshevik Revolution in 1919 Russia was divided into 11 time zones, with borders running along railroads and rivers. Russia’s time zones have changed many times since then.

There are eleven time zones in Russia with the current time from UTC + 02: 00 to UTC + 12: 00. Nevertheless, the Trans-Siberian Railway runs on Moscow time.
As of the 26th of October 2014 Russia does not apply daylight saving time (DST). 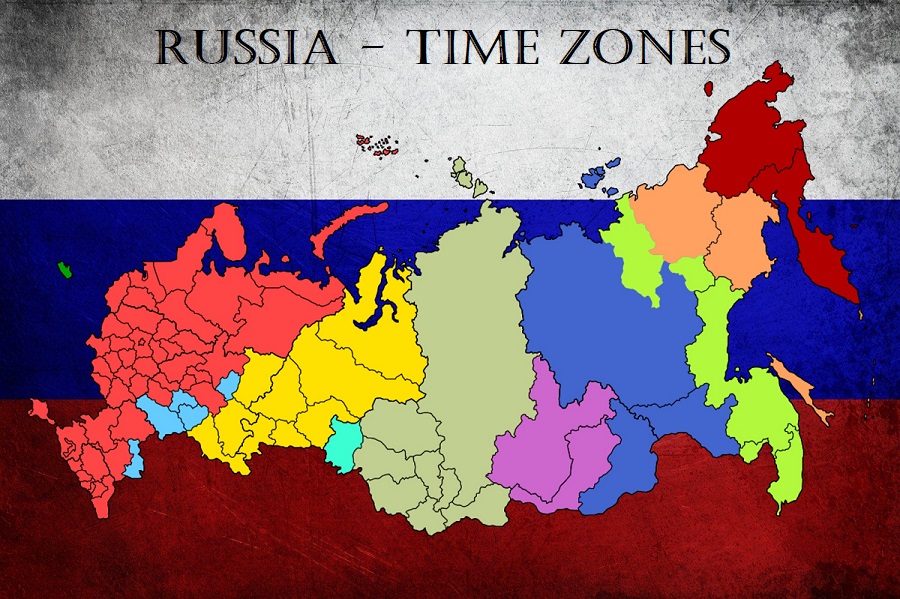 Why does Russia have 11 time zones? Because it’s a vast territory stretching over 9,000 km and 11 meridians, of which each of them is its own ‘time region’. They have a single standard time for social, commercial and legal reasons. It is also convenient for the countries bordering Russia to use the standard time for communication and business purposes.

I still think that it would be better if India worked on GMT+5h because it would be economically beneficial and it wouldn’t introduce chaos into time zones.

I think that Nepal occupies itself with artificial problems because due to its location on the eastern part of the Indian Subcontinent it should run on GMT+ 6h instead of enjoying “15 minutes of fame.” 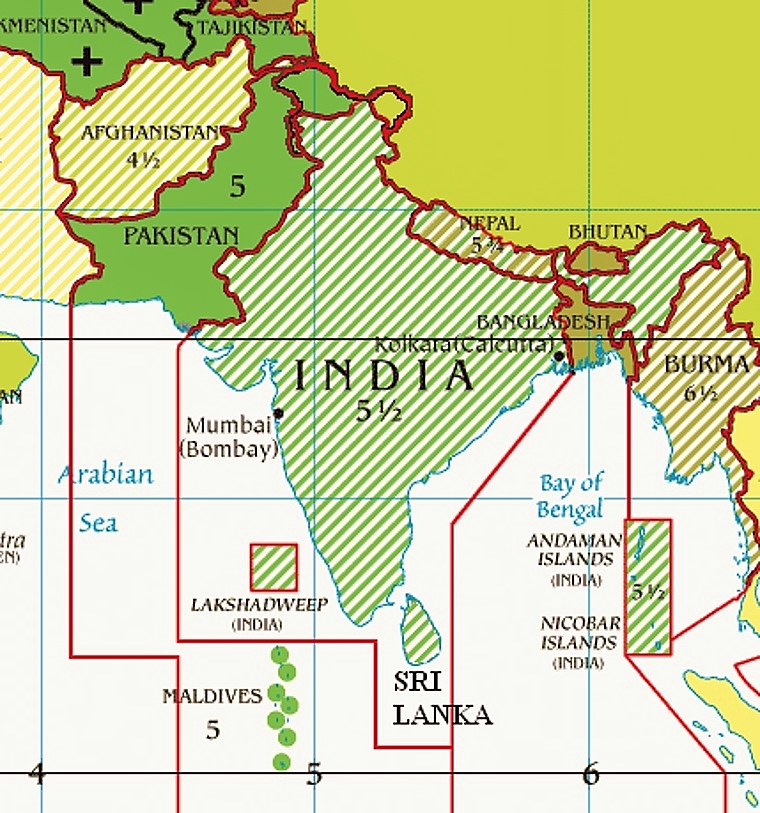 Time zones of the Indian Subcontinent, and the Nepal’s “15 minutes of fame”.

There are a few more examples of this type. Half an hour time differences are for example Iran, Sri Lanka, Afghanistan and Newfoundland in Canada – but only in summer. Some countries such as for example Egypt changed its time 4 times in 2014 and it will change its time 4 times in 2016 as well, using saving energy as the official excuse. Very strange things also happen in Russia because the president of that great country changes time zones at his own discretion. Russia used to have 9 time zones and now it already has 11 so that two regions could be on a year-round summer time.

As I wrote above one day has 24 hours and that’s why there are 12 time zones on both sides of Greenwich Mean Time. How how is it possible that there are times zones GMT+13 and GMT+14? Well, the International Date Line which runs between GMT+12 and GMT-12 along the meridian of 180° is the line of date change what means that during crossing from east to west one day is added. Prior to 1995 the International Date Line crossed the island nation of Kiribati, what meant that eastern Kiribati was one day and 2h behind western Kiribati, where the capital was. For that reason in 1995 Kiribati decided to move the International Date Line east so the whole country could fit into one day. Because of that Kiribati and Hawaii which are located along the same meridian are divided by a time difference of one day. Prior to 1995 GMT+13 and GMT+14 did not exist. 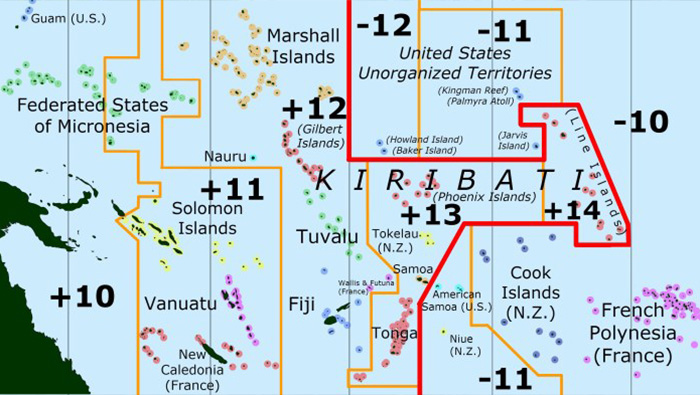 Kiribati is therefore a special place because this island nation consisting of 33 atolls has 3 time zones and finally fits in one day.

Samoa – on the 29th of December 2011 the island nation went from GMT-11 to its standard time zone GMT+13 and its daylight saving time (DST) GMT+14. For Samoa the time change was necessary because at the end of 2011 that small country was 21h behind Australia and 21h behind New Zealand, which are its main trade partners. Due to differences in time before the date change Samoa had only three full working days.

South Pole (Antarctica) and the North Pole are covered by all time zones at the same time because all the ends of all the meridians meet in one place. This means that continents which have 24h sunlight during summers and 24h night during winters don’t have time zones because it simply doesn’t make sense.