You are browsing category

I created this chapter in response to the drastically changing population of Europe in ethnic and cultural terms, as well as the crimes and social problems associated with these changes. To some these articles are the obvious truth, and to others only a conspiracy theory.

In my point of view it is the Politics of Truth, because the results of anti-white policies are perfectly visible and measurable. ‘Temporary workers’, ‘family reunification’, or ‘assistance to the victims of war’ – different times, different lies. The goal however is always the same – a transnational plan to destroy the White Christian civilization. I call  it the Great Replacement Project.

As I could expect, all the White Genocide quotes said by the Jewish Communists are always hailed by the English language media as a ‘hoax’. The biggest hoaxes in the world – (next to Yeti and the Bermuda Triangle) are 10 Downing Street and BBC !!! The political and media institutions served in English language are not English at all. 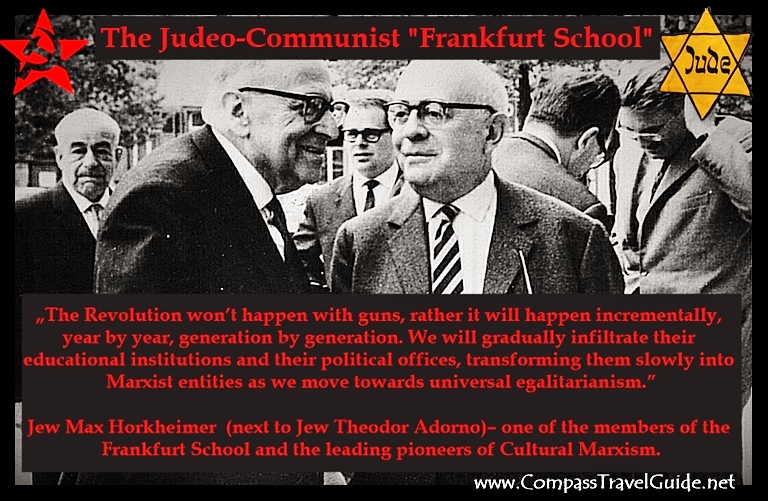 Since ‘the Lord of Darkness’ sacrificed the Two Towers on Sept the 11th, the Western World has been going through constant crises, as if it was on the way to the next stage. Destruction of peaceful Arab countries, refugee crisis, ‘3’ sexes, anal sex as a way of life, vile family destruction, constant race-mixing agenda to the disadvantage of the white race, replacement of the conservative pope into a liberal one, and finally a smokescreen in the form of virus. What’s next? Surely poverty, unemployment and debt, but what else? Perhaps the end or limitation of cash, and a personal microchip in the form of a vaccine causing infertility and heart attacks. Certain quote came to my mind:

“We are on the verge of a global transformation. All we need is the right major crisis and the nations will accept the New World Order.”

In defense of the Polish language

By: Martin Malik
Polish language is being attacked, changed and falsified, depending on who the occupied Polish government and its mainstream media parrots try to please. The Cultural Revolution, through "benevolent assimilation", is a very important element of American domination, what means that in this respect I can't see much difference between the US, Russia and China.
READ ARTICLE
Post a Comment
The politics of truth

By: Martin Malik
I've never heard that Africa is too African, that India is too Indian, or that China is too Chinese, but because of the Great Replacement Project Europe is too European, and that's why white civilization is the only one that 'needs' diversity, and that's why it is uniformly exterminated in all the white continents. Only white people 'need' tolerance and mass immigration, only white people have to feel guilty, and must apologize.
READ ARTICLE
3 Comments
The politics of truth

By: Martin Malik
The reason behind this nonsense is the mental industrialization of thoughts which can be understood as schematic-biased phrases limiting the native language while at the same time forcing to reflect on something what is completely unnecessary and meaningless.
READ ARTICLE
Post a Comment
The politics of truth

By: Martin Malik
In our small overcrowded continent, overwhelmed by an outbreak of political correctness and full of sick and twisted, sometimes even perversive ultra-liberalism, it would help to maintain the national and religious identity and so extremely important - the racial purity.
READ ARTICLE
Post a Comment
The politics of truth

By: Martin Malik
The Global Communist building its political strategy on white guilt and fighting alleged "racism" planned to make a coup for a long time, to prevent the current US President Donald Trump from winning again. George Floyd was thus a randomly chosen criminal, who first the American and then the Global Communists needed for their own political purposes.
READ ARTICLE
Post a Comment
The politics of truth

By: Martin Malik
INTERVIEW with Martin Malik. I believe that young people should form couples in such a way that they would guarantee themselves racially clean children because when a child is born in a particular land it is not only a gift to the family but also a gift to the state. For this reason every child should meet the racial standards, ethnically characteristic for a particular country.
READ ARTICLE
Post a Comment
The politics of truth

By: Martin Malik
Liberalism is one of the best code-words today for the slow decay of Western civilization. Words such as socialism, communism or revolution are already well known and have bad associations. That's why a pleasant word was needed, which would be able to capture dumb crowds. From the point of view of the nation's internal enemies, only the goal is important, not the mode of action.
READ ARTICLE
Post a Comment
The politics of truth

By: Martin Malik
Governments try to reduce the Third World population but taking into account political correctness and that depopulation edges over genocide it is a very delicate matter which has bad impact on voters. Genetically modified vegetables and meat produced by Monsanto and Codex include toxic substances causing cancer and sexual incapacity.
READ ARTICLE
Post a Comment
The politics of truth

By: Martin Malik
According to the 2011 census White people are a minority in three largest cities in the UK and London school children from non-White families were accounted for 69% what means that in many schools there aren't any White children. Extreme Muslims already control three counties in England and their votes do matter in local and general elections.
READ ARTICLE
Post a Comment
The politics of truth

By: Martin Malik
The British nation wanted to be the masters of the world but now it is a slave and a citizen of the last category to its government in its own country; and it is colonized and made pregnant by a Negro and Muslim primitives. What it is if not a genocide?
READ ARTICLE
Post a Comment

Betrayal of a nation

“A nation can survive its fools and even the ambitious. But it cannot survive treason from within. An enemy at the gates is less formidable, for he is known and carries his banner openly. But the traitor moves among those within the gate freely, his sly whispers rustling through all the alleys, heard in the very halls of government itself. For the traitor appears not a traitor; he speaks in accents familiar to his victims, and he wears their face and their arguments, he appeals to the baseness that lies deep in the hearts of all men. He rots the soul of a nation, he works secretly and unknown in the night to undermine the pillars of the city, he infects the body politic so that it can no longer resist. A murderer is less to fear.”

By: Martin Malik
Betrayal of Poland was planned by the British to smallest detail. The English wanted to beat Germans anyway, as they couldn't afford to have strong country in Europe. First they wanted Germany to eliminate Poland from the war, so they could destroy Polish economy and infrastructure, so after the war Poland could fall into complete dependence on England.
READ ARTICLE
Post a Comment
The politics of truth

Great Britain and the GREAT betrayal of Poland; part II

By: Martin Malik
Even 20 years ago Sweden was so safe that there wasn't even need to shut the front door and each one of the darkest streets was safe at any time of day or night. There were no arsons, brutal murders or rapes, there weren't any wild people in the streets nor criminal ghettos. In those times Sweden was a prosperous, safe haven for White families.
READ ARTICLE
Post a Comment

White women as the genetic legacy of the White tribe

The Union of Antichrist

By: Martin Malik
The EU's propaganda machine planned in a subtle way in the European Genocide Laboratories of Marx and Engels lead the European nations to the brink of survival. The European Union of the politically correct eurocrats is modeled on the communist machine of the Soviet Union where every country is only a republic without being able to make its own decisions.
READ ARTICLE
Post a Comment
The politics of truth

By: Martin Malik
Currently if a group of Muslims with machine guns wants to go from Germany to Poland and provided they wouldn't break traffic rules they could go unnoticed and kill the "infidels" in the name of "the religion of peace". Reinstatement of border controls would ensure serious restrictions on the movement of Gypsy herds and high quality loafers, rapists and African terrorists.
READ ARTICLE
Post a Comment
The politics of truth

European parliament and the taste of kosher democracy

By: Martin Malik
The European Union of Socialist Republics is being destroyed by Communists. The EU's major parties are: the European People's Party, the Progressive Alliance of Socialists and Democrats, and the far-left Alliance of Liberals and Democrats for Europe. Parties which treat Communist Manifesto of Marx and Engels as their political Bible occupy the EU Parliament.
READ ARTICLE
Post a Comment
The politics of truth

Zionwood – the factory of Jewish dreams

By: Martin Malik
Hollywood is a tool designed to brainwash people with the extreme Left, Zionist propaganda so people could mentally consume what is worthless and have impression that everybody lives in America and have to behave and think the way Hollywood suggests. We should protect our children from the poison which comes out from the film laboratories of the Zionwood propaganda machine.
READ ARTICLE
1 Comment

THE NEW COLOURS OF BOLSHEVISM

"In order to conquer a country that is stronger militarily and economically, first it must rot from within by the applause of degenerate masses".