Armenia is a country of beautiful landscapes, where Christian culture with its ancient churches has raised very good, friendly, hospitable people. Visa is free and everyday budget of 15 pounds is sufficient although there were days where I was spending almost nothing. I strongly recommend Armenian adventure.

My way to Armenia was long and adventurous because to get there I had to start my trip from Azerbaijan, then through Georgia, and finally to Armenia. After a free stamp in my passport I got to Alaverdi, which is a small mining town inside Debed Canyon. From there I organized a few trips to the ancient monasteries of Sanahin, Haghpat, Odzun and by all means terrific Akhtala. Getting there was also an adventure because I was lucky enough to be on a 30 year old, rotten Lada Niva. The driver had to start the car by connecting two cables. As he said he did’t even need a key but it was better to start the engine whilst driving off the hill.

My trip around Armenia

Alaverdi was my first place and it was really good, although people did not smile there too much due to terrible economy. In Alaverdi, the biggest attraction was the cable car built in 1953, which was important because of the mining industry. Today it is a tourist attraction, where one can admire the mountain panorama of the country. That cable car is something special because it allowed me to travel back in time.

From there I hitchhiked to a post Soviet town of Vanadzor stopping en route in the ruins of Kobayr monastery, where local villagers gave me a bag of grapes. Then I hitchhiked to Vanadzor where I had a problem with finding transport, but when it finally came it was great. I was given a lift by a man who clearly had his most sober times far behind. There are many incompletely sober drivers in Armenia, and most of them are very helpful to tourists. Hitchhiking is one of the best ways to get to know Armenians. 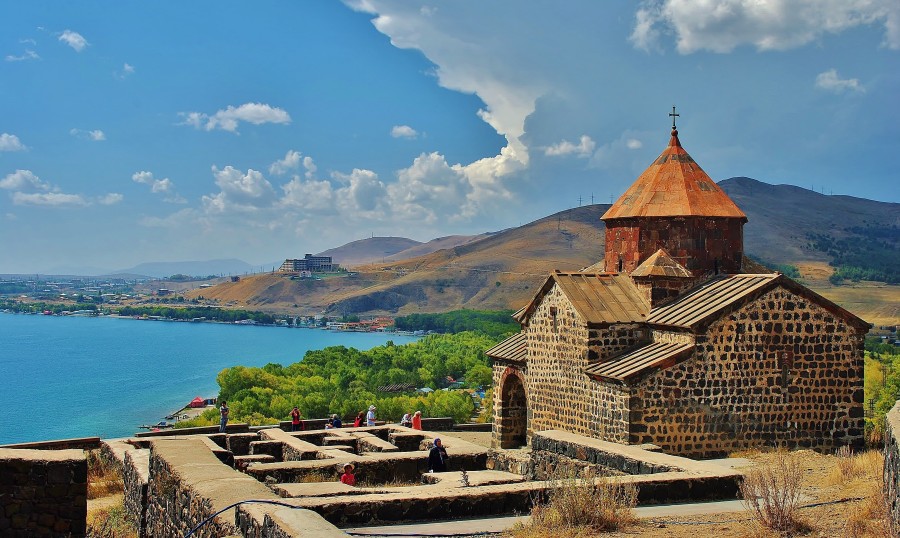 On the way we also stopped to change the wheel and because we had a lot of helpers I took a huge hammer and helped someone else to destroy concrete stairs in a construction site just next to us. Then everyone had a glass of 80% vodka and we were on the way again. After a great trip I got to a town called Dilijan, with a nice lake, mountains around and good food. In Dilijan there are also Soviet blocks of flats made of concrete and huge monuments from the times of Soviet Armenia. From there I hitchiked again vt few cars, to get to such ancient and beautiful monasteries as Goshavank and Haghartsin.

Impressive old churches against the backdrop of picturesque views are Armenia’s greatest asset. I also like the people of Armenia, their cuisine, fruit and sense of humor.

I also went to a little resort with a picturesque lake called Parz Lich where I also spent some time watching fishermen catching their dinner. From Dilijan I had one of the more pleasant hitchhiker`s experiences of my life. After waiting about half an hour my prayers were answered by a red, about 40 year old Zhiguli with loud Russian music. I was aboard the miracle of the Soviet automotive industry, which was almost as ancient as the churches I visited. 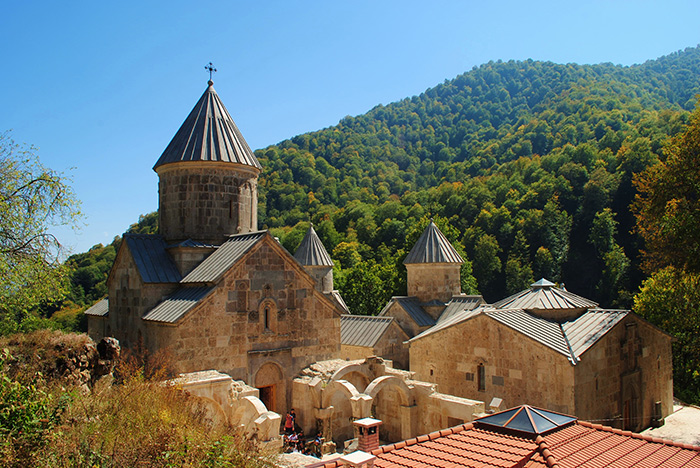 Haghartsin Monastery is situated in the Dilijan National Park, and is surrounded by beautiful forests on the slope of the mountains. Haghartsin was built between the 10th and 13th centuries.

It was a great ride which took me straight by the Sevan lake and the beautifully located monastery called Sevanavank. The whole area is very picturesque. I also liked the atmosphere in the church, and paintings were sold in front of it. I swam there in a very cold lake, I walked, and after taking great photos I took my big rucksack and went to the road again. This time the transport was waiting for me. When I was drinking tea a truck driver said that I could jump on his truck and that way I got to the glorious capital of Armenia – Yerevan.

Why Yerevan is so glorious? Because it has the prettiest, the best dressed women in the whole of Caucasus, and some interesting sights too. I spent 3 days in Yerevan getting to know the capital and its people. From there I partly hitchhiked to Echmiadzin – ‘the Vatican of Armenia’. It was a culturally and architecturally nice place, although the term was very exaggerated in my opinion.

I also took a trip to the Geghard i Garni Monastery, which in my opinion is the most atmospheric pagan temple in the ancient Roman style. 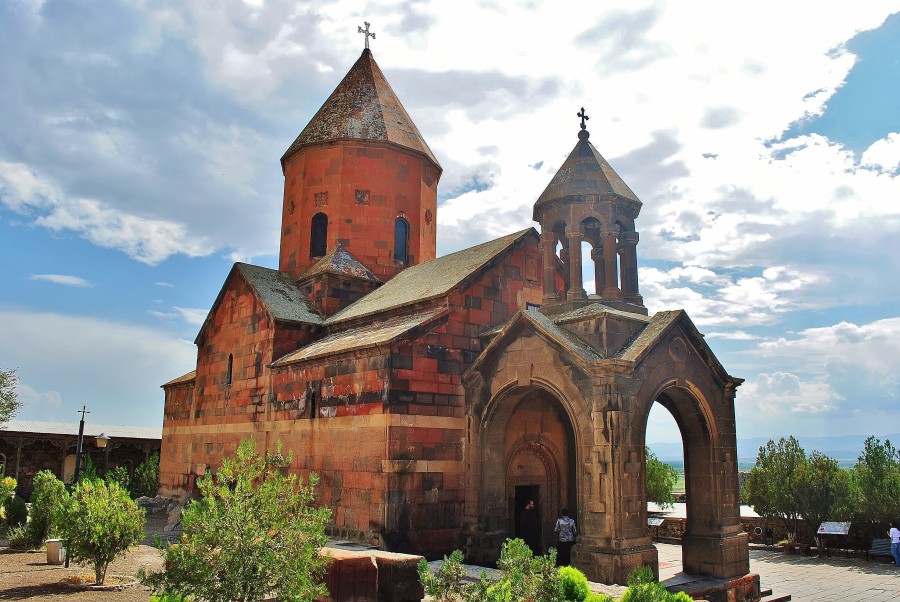 It was also a great pleasure to see the ancient monastery of Khor Virap, which is located on the Ararat plain in Armenia, about 8 km from the border with Turkey. From Khor Virap you can see Mount Ararat, where according to the Bible, Noah’s Ark crashed after 40 days and 40 nights. The entire area is exceptionally beautiful.

I hitchhiked about 200km by various transport to and around the region called Vayots Dzor, which is full of canyons, caves, monasteries, wineries and even more mountains.

Around Vayots Dzor I travelled by various transport, including 35 year old Zhiguli without seats, about 40 year old Moskvich, 25 year old Lada Niva and also by a variety of trucks including ancient Soviet Kamaz. Some of them were transporting petrol and others car parts but all of them had one thing in common. They were all very old, very rusty, they were shaking and they all transported me. Some of them were moving quite fast and the others only 30km/h. Either way I was moving forward. There was even a truck transporting cow shit but I missed that tourist attraction. 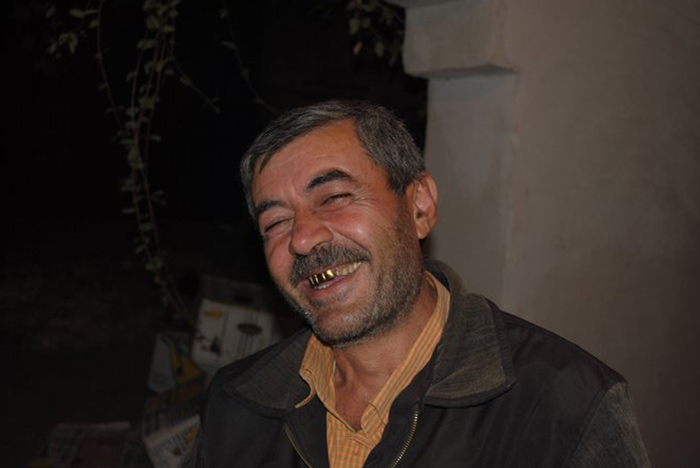 Armenian man with gold. I slept at his house, ate apples and pomegranates from his orchard. Pomegranates are the national fruit of Armenia.

The two great monasteries worth mentioning are Noravank and stunning in every way Tatev, although I have to admit that in the south of Armenia I met the most hospitable and the friendliest people. I also visited Goris, where I saw rock houses similar to those in Capadocia (Turkey), and then I hitchhiked to Nagorno Karabakh.

Over nearly 2 weeks in Armenia I saw a lot beautiful, ancient churches, poor little towns and good looking Yerevan. I had grapes and nuts straight off the tree and I crossed most of Armenia by hitchhiking. I also had few cold nights in a tent but at the end it was worth it.

Armenia is a country of beautiful landscapes, where Christian culture with its ancient churches has raised very good, friendly, hospitable people. Visa is free and everyday budget of 15 pounds is sufficient although there were days where I was spending almost nothing. I strongly recommend Armenian adventure. 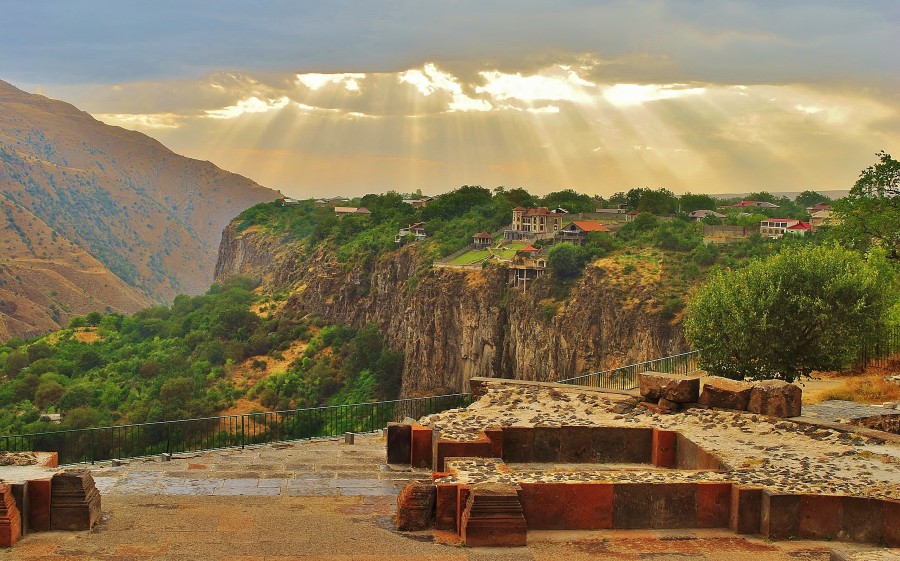 Panorama of Armenia, near the pagan temple in Garni.

After completion of my trip around Caucasus I will publish photos and a detailed journal with all practical information, to make sure that your trip will also prove successful.