The Sultanate of Brunei (Brunei Darussalam) I recommend as an interesting stop-over in the country at the end of the world, which a passionate traveller cannot miss.

I got to the Sultanate of Brunei from the state of Sarawak (East Malaysia). The very small and rich Brunei, to most visitors is a way of ticking off the next country on the list and getting an exotic stamp in the passport. The truth is that there is really not much to see, but after all Brunei was a nice experience. I lived in a dorm for $ BD10 and the average meal cost me about $ BD5. Most of my time I spent in the capital city of Brunei – Bandar Seri Begawan, as most tourist attractions are there.

Although Brunei is a very rich country, ruled absolutely by the Sultan himself, it was not as expensive as I expected. Also, I am definitely not a fan of Islam, but certain Islamic architecture was beautiful and worth seeing, provided of course that all the monumental mosques remain in Brunei and would not be built in Europe. As the most spectacular mosque, with a stone boat located on the artificial pond and surrounded by gardens, I would recommend Omar Ali Saifuddien mosque, built for $ 5 million. Its golden onion-shaped domes are visible from many parts of the city. The sultan of Brunei.

Not to be missed is also the Royal Regalia museum, which answers the question what to give someone who has everything. For example from the Queen Elizabeth II Sultan of Brunei received a green flower vase which was not the nicest unfortunately. In my point of view grandma Betty could have done a lot better. I also went to several other museums, and I took a boat trip, during which I saw the world’s largest water village, called Kampung Ayer. It was indeed a huge undertaking, given that there are 20,000 people living in 28 villages on water. I also sailed to a mangrove forest to see my favorite long-nosed monkeys, which are a proud symbol of Borneo. I have to admit that people of Brunei are nice and helpful, especially that I was hitchhiking very often.

If someone has the money, for $ BD235 it is possible to go on a 2 day tour to the national park in the smaller enclave of Brunei, called Temburong. It is a close encounter with the Brunei’s natural beauty, but it is cheaper in neighbouring Malaysia. 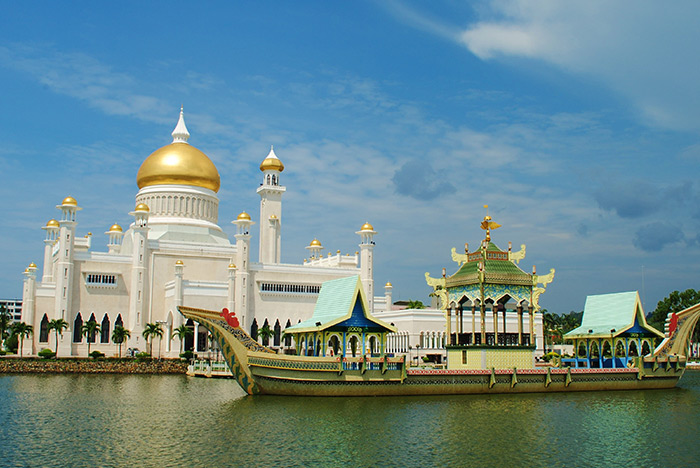 The Sultanate of Brunei (Brunei Darussalam) I recommend as an interesting stop-over in the country at the end of the world, which a passionate traveller cannot miss. On the other hand, I would never go just to Brunei, as I could get bored to death. Two days are enough, unless someone wants to go to the jungle for the other two. Either way, I recommend Brunei as a new, interesting travel experience between the Malaysian states of Sarawak and Sabah.